The 2013 thriller starring Samantha Morton and Michael Shannon will hit Blu-ray this September.

In an early announcement to retailers, Scream Factory is set to release 'The Harvest' on Blu-ray on September 1.

In his first film in nearly 15 years, the director of Henry: Portrait of a Serial Killer harks back to the depravity that made his 1986 debut a horror milestone. Equally terrifying, but less based in reality, The Harvest is closer to a fairy tale from Grimm's darkest nightmares.

Maryann (an impressive Natasha Calis, The Possession) moves in with her grandparents after she's orphaned. Desperately lonely, the preteen sets out to befriend a deathly ill, bed-ridden boy (Charlie Tahan, Gotham), despite the outright disapproval of his mother (Samantha Morton, Minority Report, Sweet and Lowdown). Maryann's persistence pays off, however, and during a series of secret visits she gradually uncovers some seriously sinister goings-on in the house...

Morton's performance as the boy's overprotective surgeon mom is the stuff of great screen villainy — at once utterly monstrous and tragically desperate — so much so that she makes even frequent heavy Michael Shannon (Boardwalk Empire, Man of Steel), as the more subdued dad, pale in comparison.

You can find the latest specs for 'The Harvest' linked from our Blu-ray Release Schedule, where it is indexed under September 1. 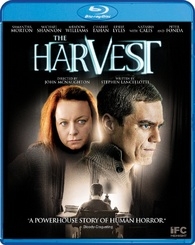