A Double Dose of 'Troll' Bound for Blu-ray

A cult classic and the best worst movie ever made will be released together on Blu-ray in November.

In an early announcement to retailers, Scream Factory says 'Troll / Troll 2' will arrive on Blu-ray on November 17.

Troll - Lock the doors and pull out the weed-wacker for this house party of horror! One family is about to find out there's no place like home when a troublesome troll starts taking over their building, transforming each apartment into an overgrown garden of ancient evil and turning tenants into a horde of hairy hobgoblins! Michael Moriarty and Julia Louis-Dreyfus star in this super-slimy scare-fest.

Troll 2 - Those greedy goblins are back and hungrier than ever in this gourmet gross-out! Disguised as friendly country folk, a pugnacious posse of people-eating trolls lures visitors to their town. But a family of four is about to discover this place is a real tourist trap... and now, the no-good gnomes must be destroyed before the family gets flambéed... and the world becomes a buffet in this feeding frenzy of fear!

As an added bonus, the first 5,000 copies sold will also include a DVD copy of Best Worst Movie. Fans can pre-order their copies by visiting ShoutFactory.com.

You can find the latest specs for 'Troll / Troll 2' linked from our Blu-ray Release Schedule, where it is indexed under November 17. 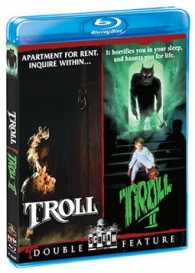