Juan Fortuny's 'Crimson: The Color of Terror' Transplanted to Blu-ray

The 1973 horror starring Paul Naschy arrives on Blu-ray in June.

In an early announcement to retailers, Redemption will be releasing 'Crimson: The Color of Terror' on Blu-ray on June 14.

Eurocult icon Paul Naschy (Frankenstein's Bloody Terror) stars as a criminal gang leader who undergoes a radical surgery in Juan Fortuny s 1973 thriller Crimson. When a jewel heist goes awry, Jack Surnett (Naschy) and his fellow thieves take shelter at the home of a scientist experimenting in brain replacement. Through the surgical finesse of the doctor s wife (Silvia Solar), Surnett is restored to health, but suffers irresistible pangs of bloodlust and conventional lust as well after the brain of a criminal known as The Sadist (Roberto Mauri) is grafted onto his own.

You can find the latest specs for 'Crimson: The Color of Terror' linked from our Blu-ray Release Schedule, where it is indexed under June 14. 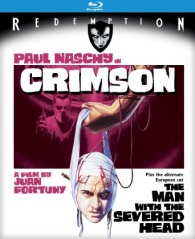