"This is a major move for Redbox as we focus on expanding consumer access to home entertainment options across price points and formats," said Galen Smith, CEO of Redbox. "As the popularity of 4K content increases and pricing of 4K hardware decreases, we're excited to offer the best viewing experience at the best price for 4K Blu-ray discs." 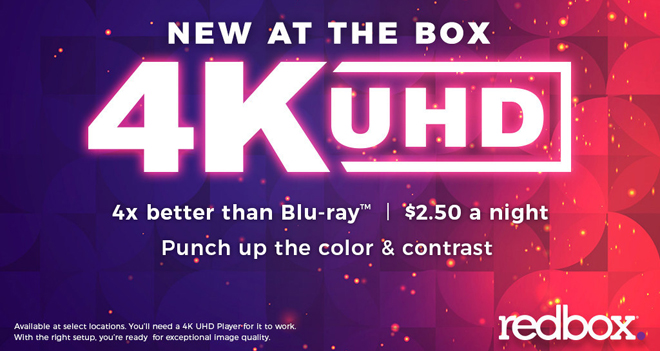 4K Ultra HD Blu-ray disc rentals cost $2.50 per night (regular Blu-rays run $2.00 per night). The initial lineup of available 4K titles includes Black Panther, The Commuter, The Matrix, and The Martian. More new releases and catalog titles are set to be added weekly, though the exact number of movies and copies will vary by kiosk. Online reservations are not yet available for 4K discs, but Ultra HD Blu-ray rentals can be returned to any Redbox location.

Meanwhile, the company continues to be engaged in a heated legal battle with Disney over the sale of Disney digital copy codes through Redbox kiosks. The next hearing for the case is scheduled for June 4.