'The Shannara Chronicles: Season One' Blu-ray Dated for December

The first season of the MTV fantasy series is coming to Blu-ray in December.

In an early announcement to retailers, Paramount is preparing 'The Shannara Chronicles: Season One' for Blu-ray on December 6.

Specs have not been detailed yet, but supplements will include: Behind The Scenes Featurette; Exploring New Zealand; Making of the Dagda Mor; Interview with writer Terry Brooks; And MORE...

You can find the latest specs for 'The Shannara Chronicles: Season One' linked from our Blu-ray Release Schedule, where it's indexed under December 6. 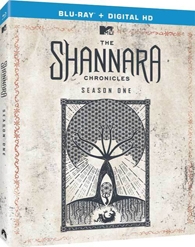 Discs mentioned in this article: (Click for specs and reviews)
The Shannara Chronicles: Season One (Blu-ray)