The fan favorite remastered in 4K getting a new Blu-ray release in June has now been fully detailed.

As previously reported, Paramount will be releasing 'Star Trek: The Wrath of Khan: Director's Cut (Remastered in 4K)' on Blu-ray on June 7.

'Star Trek II: The Wrath of Khan' is fondly regarded as being the closest in spirit to the 1966-69 TV series that spawned it. Admiral Kirk (William Shatner) escapes the tedium of a desk job to join Mr. Spock (Leonard Nimoy) and Dr. Leonard "Bones" McCoy (DeForest Kelley) on another space mission. While boldly going where no man etc. etc., Kirk crosses the path of his old enemy Khan (Ricardo Montalban), who as any die-hard Trekker can tell you, was the chief antagonist in the 1966 Trek TV episode "Space Seed." Leading a crew of near-savage space prisoners, Khan insinuates himself into the Genesis Project, which is designed to introduce living organisms on long-dead planets. Intending to harness this program for his own despotic purposes, Khan engages in battle with the Enterprise crew. ~ Daniel Gelb, Rovi.

You can find the latest specs for 'Star Trek: The Wrath of Khan: Director's Cut (Remastered in 4K)' linked from our Blu-ray Release Schedule, where it's indexed under June 7. 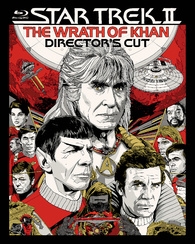