The second season of the classic TV series will now arrive on Blu-ray in August.

Previously, Paramount stated that they were planning to release 'I Love Lucy: Ultimate Season 2' on Blu-ray on July 14, but now the date has been changed to August 4.

There's more to love on Blu-ray! You've loved and laughed at Lucy, Ricky, Fred, and Ethel for years - but you've never seen I Love Lucy like this on glorious high-definition Blu-ray. Highly collectible Blu-ray set! Includes every episode from the second season, beautifully restored in high definition, in original night-of-broadcast form with original sponsor openings and closings.

The five disc set will include: Audio commentary on the classic "Job Switching" (aka "Chocolate Factory") episode. A newly-colorized version of "Job Switching." Scenes from "Stars in the Eye," a CBS special from November, 1952, featuring the I Love Lucy cast. An I Love Lucy comedy sketch originally presented on "The Red Skelton Show" from May, 1953. A French-Canadian version of "Job Switching," including unique opening and closing graphics and French-Canadian audio track. Special gloss packaging; this makes the perfect gift for any classic TV fan!

You can find the latest specs for 'I Love Lucy: Ultimate Season 2' linked from our Blu-ray Release Schedule, where it's now indexed under August 4. 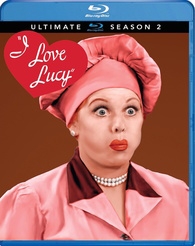