The Blu-ray of the critically-acclaimed film will arrive in March.

In an early announcement to retailers, Paramount will be releasing 'The Big Short' on Blu-ray on March 15.

Based on the best-selling book by Michael Lewis, The Big Short details the true story of four outsiders who risked everything to take on the big banks during the greatest financial fraud in U.S. history. Christian Bale, Steve Carell, Ryan Gosling and Brad Pitt deliver career-best performances in "the most wildly entertaining must-see movie of the year" (Toni Gonzales, Fox-TV).

The Blu-ray will feature 1080p video, a DTS:X soundtrack, and supplements include: In the Tranches: Casting; The Big Leap: Adam McKay; Unlikely Heroes: The Characters of The Big Short; The House of Cards: The Rise of the Fall; Getting Real: Recreating an Era; and Deleted Scenes.

You can find the latest specs for 'The Big Short' linked from our Blu-ray Release Schedule, where it is indexed under March 15. 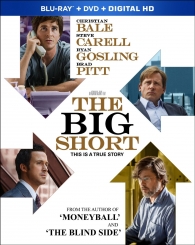