The six-part Civil War drama is headed for Blu-ray in February.

In an early announcement to retailers, PBS will be releasing 'Mercy Street' on Blu-ray on February 2.

Set in Virginia in the spring of 1862, the program follows the lives of two volunteer nurses on opposite sides of the conflict; Mary Phinney, (Mary Elizabeth Winstead), a staunch New England abolitionist, and Emma Green, (Hannah James), a naive young Confederate belle. The two collide at Mansion House, the Green family's luxury hotel that has been taken over and transformed into a Union Army Hospital in Alexandria, a border town between North and South and the longest-occupied Confederate city of the war. Ruled under martial law, Alexandria is now the melting pot of the region, filled with soldiers, civilians, female volunteers, doctors, wounded fighting men from both sides, runaway slaves, prostitutes, speculators and spies.

The series is executive produced by Ridley Scott (Gladiator, Thelma and Louise); David W. Zucker (The Good Wife and The Man in the High Castle) of Scott Free; Lisa Q. Wolfinger (Desperate Crossing, the untold story of the Mayflower) and David Zabel (ER).

The intersection of North and South within the confines of a small occupied town creates a rich world that is chaotic, conflicted, corrupt, dynamic and even hopeful - a cauldron within which these characters strive, fight, love, laugh, betray, sacrifice and, at times, act like scoundrels. This series is not about battles and glory, it's about the drama and unexpected humor of everyday life behind the front lines. It's a fresh twist on an iconic story, one that resonates with larger themes we still struggle with today.

Based on historical characters and events, Mercy Street skillfully weaves together diverse storylines that offer different perspectives on the war. A pair of nurses from opposite worlds and political persuasions opens a window into a world where the unprecedented medical demands create a chaotic atmosphere and challenge doctors, nurses and patients in unimaginable ways, while the pressures of Union occupation threaten to tear apart a proud Confederate family.

Specs and supplements haven't been revealed yet, but the suggested list price for the Blu-ray is $44.99.

You can find the latest specs for 'Mercy Street' linked from our Blu-ray Release Schedule, where it is indexed under February 2. 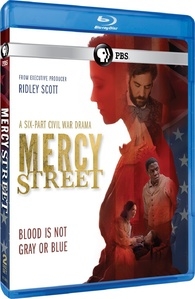