The potential new membership plan could lead to higher prices for HDR content.

According to a report by TuttoAndroid, Netflix has begun testing a new "Ultra" subscription plan in Europe. The new tier is currently being offered to some users in Italy and Germany for 16.99 or 19.99 euros, which translates to about $19.88 or $23.38.

The proposed Ultra plan would join the existing Premium, Standard, and Basic plans as the most expensive tier of the bunch. And though specific differences between the plans vary during the trial depending on what device customers sign up with, the main distinction between the current Premium plan and the new Ultra plan appears to be HDR support -- something that was actually already included in the original Premium tier but now seems to be removed. Likewise, some users who have access to the new plan have also seen a reduction in the number of simultaneous screens they can stream to on the Standard plan from 2 to 1 and the Premium plan from 4 to 2. This means that the Ultra plan is basically just a price increase for HDR and 4 screen streaming without offering any new features of its own.

Here's a breakdown of the new test plan and how it affects the other options per CordCutting.com: 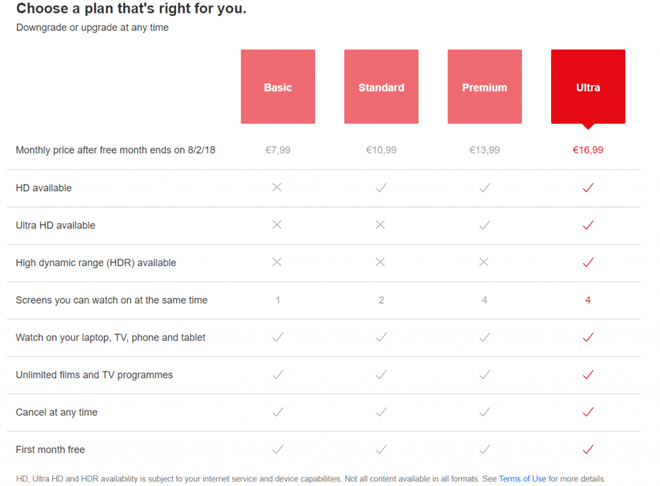 Speaking to CNET, a Netflix representative confirmed the test run and said in a statement that "In this case, we are testing slightly different price points and features to better understand how consumers value Netflix." Still, the spokesperson went on to clarify that "Not all Netflix subscribers will see the test and the company may not ever offer the specific price points or features being tested."