Four 80s flicks are heading to the beach on Blu-ray in March.

In an early announcement to retailers, Mill Creek Entertainment is preparing 'Sun, Sand and Sweat - 4 Movie Collection' for Blu-ray on March 15. The set will include:

'Private Resort' - Johnny Depp and Rob Morrow star as two sex-starved teens out for the adventure of their lives in this outrageous Spring Break comedy filled with sand, surf and skin! Jack (Depp) and his buddy Ben (Morrow) check in at a posh Florida resort, planning to spend every hour in hot pursuit of gorgeous babes. But their plans hit a major detour when they try to bed the wife of a conniving jewel thief (Hector Elizondo). They'll have to outsmart him, a nasty security guard and an obnoxious jock if they're ever going to get a moment alone with the girls of their dreams!

'Hardbodies' - This story sets out to prove that a smooth, magnetic young man can teach his amorous techniques to almost anyone, leading to successful and hilarious results. Three middle-aged men rent a beach house and hire a young stud to teach them how to score with the girls on the beach.

'Spring Break' - In 1983 Spring Break hit theaters just in time for the time honored tradition of the same name. The film quickly became a cult classic, known for it’s great one-liners, totally 80’s dialogue and outrageous party sequences. Despite its popularity, the film was never released on DVD…Until NOW! The film focuses on two party guys that make a trek to Florida for a week of uncontrollable partying, however after a small mix-up they find themselves rooming with two of the biggest dorks to ever hit the beach. Now in order to remain in the room they must show the two nerds the time of their life! This is like, totally the most fun a couple bodies can have, for sure!

'Perfect' - Travolta stars as a ROLLING STONE reporter covering two hot stories. One concerns a businessman arrested on drug charges and the other is about a health club which Travolta believes is a singles bar.The aerobics instructor grants him an interview only after being assured that he is doing a glowingreport of her club.

You can find the latest specs for 'Sun, Sand and Sweat - 4 Movie Collection' linked from our Blu-ray Release Schedule, where it's indexed under March 15. 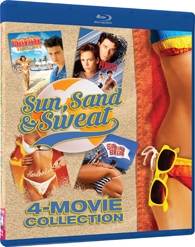