The 2004 TV miniseries written by Dean Koontz is planned for Blu-ray in February.

In an early announcement to retailers, Mill Creek says 'Frankenstein' will arrive on Blu-ray on February 16.

What happens when man violates the laws of God and science? For Captain Walton (Emmy and Golden Globe winner Donald Sutherland, The Hunger Games) and the crew of a weather-beaten ship stranded in the icy sea, the answer follows their rescue of a scientist close to death, frozen in fear, and insane with dire warnings. Viktor Frankenstein (Alec Newman, Frank Herbert s Dune) has a story to tell a story as chillingly real as the tortured howls emanating from the Arctic fog and as timeless as the need to be loved.

Specs and supplements have yet to be revealed, but suggested list price for the Blu-ray is $14.98.

You can find the latest specs for 'Frankenstein' linked from our Blu-ray Release Schedule, where it is indexed under February 16. 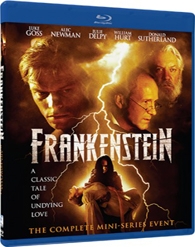