The bonus features for the horror flick available on Blu-ray in October have now been detailed.

As previously reported, Magnolia says 'Satanic' will be available on Blu-ray on October 4.

Before taking a road trip to Coachella, the group checks into the Flower Hotel, the scene of Lainey Gore’s gruesome suicide in homage to Satan himself, for their own satanic tour in the City of Angels. The thrill seekers visit the site of the infamous Manson murders and an unnerving satanic store, leading the group to mistakenly interrupt a cult’s sacrifice of a girl named Alice (Sophia Dalah, Unbroken). Ultimately allowing her to break free, the travelers soon begin to question her innocence as she has an unsettling admiration for the spirit of Lainey Gore.

Special features of SATANIC include a behind-the-scenes look at the making of the pulse-pounding film, exclusive interviews with the cast, and a glimpse at the special effects used when creating some of the film’s most terrifying scenes.

You can find the latest specs for 'Satanic' linked from our Blu-ray Release Schedule, where it's indexed under October 4. 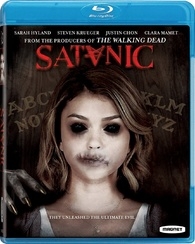