There Can Be Only One: 'Highlander: 30th Anniversary Edition' Announced for Blu-ray

The cult classic starring Christopher Lambert and Sean Connery is getting a 30th anniversary edition in September.

In an early announcement to retailers, Lionsgate will be bringing 'Highlander: 30th Anniversary Edition' to Blu-ray on September 27.

Celebrate the 30th Anniversary of the original cult classic that inspired movie and TV franchises! An immortal Scottish swordsman must confront the last of his immortal opponents, a murderously brutal barbarian who lusts for the fabled “Prize.”

You can find the latest specs for 'Highlander: 30th Anniversary Edition' linked from our Blu-ray Release Schedule, where it is indexed under September 27. 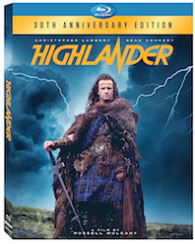