As previously reported, Lionsgate was preparing 'Room' for home video, and the Blu-ray is now available in stores.

Brie Larson has won Best Actress awards from the Academy Awards, Golden Globes, Independent Spirit Awards, Screen Actors Guild, National Board of Review, and multiple film critics' societies for her portrayal of the fiercely protective Ma. Directed by Lenny Abrahamson ('Frank'), the "life-affirming and awe-inspiring" (Collider) story features heart-wrenching performances by Academy Award nominees Joan Allen and William H. Macy as parents who have finally been given back their daughter, and Sean Bridgers as the man who abducted her. 'Room' was also the winner of the People's Choice Award at the 2015 Toronto International Film Festival.

You can find the latest specs for 'Room' linked from our Blu-ray Release Schedule, where it's indexed under March 1. 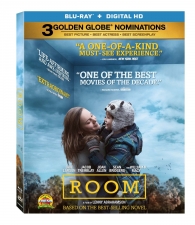