The second season of the acclaimed Netflix original series will be available on Blu-ray in May.

As previously reported, Lionsgate says 'Orange is the New Black: The Complete Second Season' is coming to Blu-ray on May 19.

Nominated for 12 Primetime Emmys and 4 Golden Globes, Orange is the New Black is a fierce and funny series that follows Piper Chapman (Taylor Schilling) when a crime she committed in her past sends her to an all-women's prison with an unforgettable and irreverent group of fellow inmates. Shocking revelations and new arrivals shake up the lives and relationships of Litchfield's prisoners in this highly anticipated second season. .

The 3-disc set will feature 1080p video, a lossless 5.1 soundtrack, and supplements include: Audio commentaries with cast and crew (on episodes "Hugs Can Be Deceiving" and "You Also Have a Pizza"); "Back Before the Potato Sack" featurette; "Orange Peeled" featurette; "A Walk Around the Block" featurette; and "The VEE.I.P. Treatment" featurette.

You can find the latest specs for 'Orange is the New Black: The Complete Second Season' linked from our Blu-ray Release Schedule, where it's indexed under May 19. 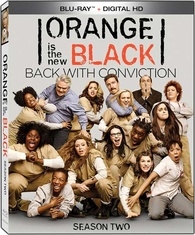