The intense thriller coming to Blu-ray in July has now been fully detailed.

As previously reported, Lionsgate says 'Green Room' will hit on Blu-ray on July 12.

After witnessing a shocking crime, a young rock band is unexpectedly thrust into a life-or-death battle to escape the clutches of a diabolical club owner (Stewart) and his ruthless henchmen in this white-knuckle thriller.

You can find the latest specs for 'Green Room' linked from our Blu-ray Release Schedule, where it is indexed under July 12. 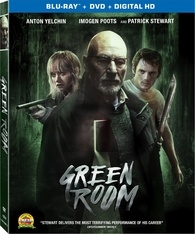