The sci-fi film will be the first Blu-ray to feature a DTS:X soundtrack.

As previously reported, Lionsgate will be releasing 'Ex Machina' on Blu-ray on July 14. The disc will be the first Blu-ray to include a DTS:X immersive audio soundtrack.

DTS:X is an object-based surround sound format that is poised to compete with Dolby Atmos. For more information, check out our DTS:X Home Theater Guide.

Caleb, a gifted programmer at the world's largest Internet company, wins a competition to visit the private mountain retreat of Nathan, the reclusive CEO of the company. Caleb later learns he will have to participate in a strange experiment involving interaction with the world's first genuine artificial intelligence, housed in the body of a beautiful robot girl.

The Blu-ray will feature 1080p video, a DTS:X soundtrack, and supplements will include: Through the Looking Glass: Creating Ex Machina 5-Part Featurette; SXSW Q&A with Cast and Crew; and Eight Behind-the-Scenes Vignettes.

You can find the latest specs for 'Ex Machina' linked from our Blu-ray Release Schedule, where it is indexed under July 14. 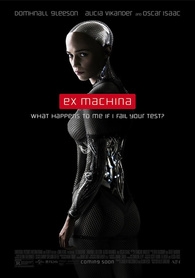 Discs mentioned in this article: (Click for specs and reviews)
Ex Machina (Blu-ray)