The horror comedy is coming to Blu-ray in November.

In an early announcement to retailers, Lionsgate is preparing 'C.H.U.D. II: Bud the CHUD' for Blu-ray on November 22.

Kevin, Steve, and Katie are an inseparable trio of friends doing some extracurricular snooping in the school science lab when, among the test tubes and beakers, they discover a corpse! But before they can say "Abra Cadaver," the body disappears, rolling down Route 51 strapped to a gurney. The kids need a spare stiff, and fast. What they find is "Bud the Chud," a half-dead decomposing humanoid, the result of a military experiment gone haywire. When Bud sets out on a killing spree, the kids, the Army, the police, and the FBI are hot on his trail, trying to save the entire town from becoming "Chudified!"

You can find the latest specs for 'C.H.U.D. II: Bud the CHUD' linked from our Blu-ray Release Schedule, where it's indexed under November 22. 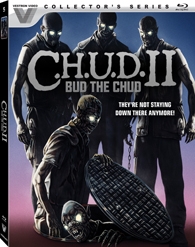 Discs mentioned in this article: (Click for specs and reviews)
C.H.U.D. II: Bud the CHUD (Blu-ray)