Directed by The Erwin Brothers (I Still Believe and I Can Only Imagine) and based on the book "All Things Possible” by Kurt Warner with Michael Silver, Lionsgate's American Underdog tells the tale of how a grocery store stockboy follows his dreams and becomes an NHL superstar. The 4K Ultra HD Blu-ray will feature a Dolby Atmos soundtrack and several bonus features including an audio commentary, multiple featurettes, and deleted scenes.  Pre-Order the 4K UHD here. 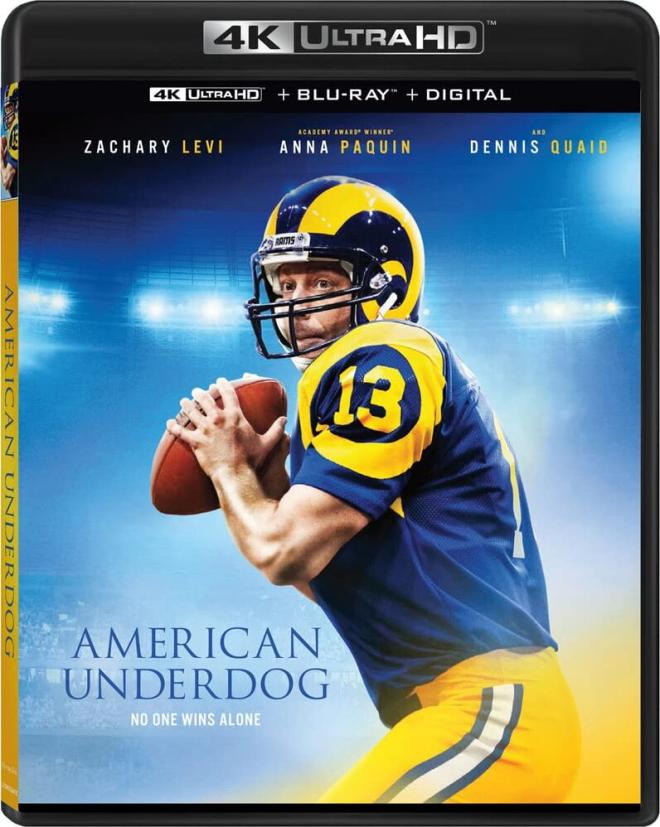 American Underdog will also be available on Blu-ray and will include the same bonus features as the 4K release and both editions will present the film in 2.39:1 aspect ratio. Pre-Order the Blu-ray here. 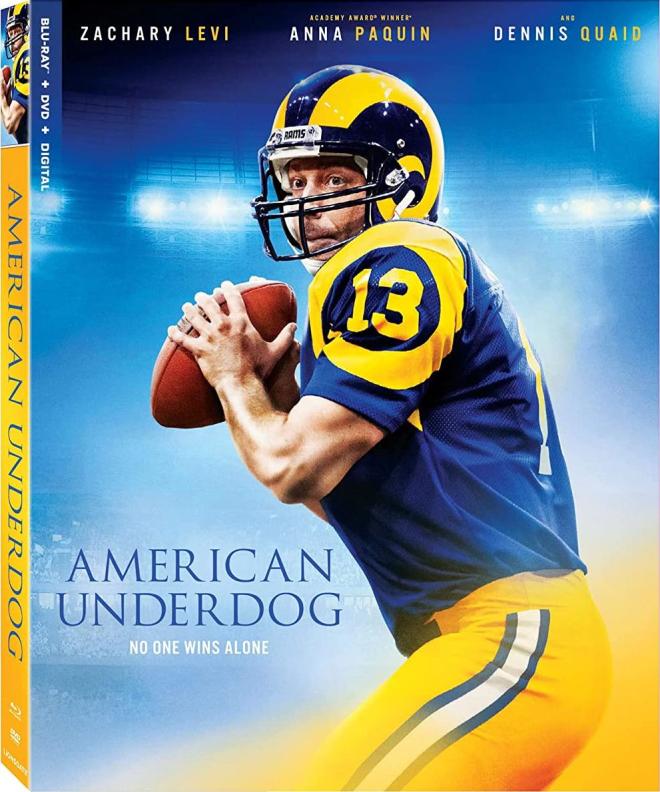 SANTA MONICA, CA (January 18, 2022) – Based on the inspirational true story of two-time NFL MVP, Super Bowl MVP, and Hall of Fame quarterback Kurt Warner, American Underdog arrives on Digital February 4 and on 4K Ultra HD Combo Pack (plus Blu-ray and Digital), Blu-ray Combo Pack (plus DVD and Digital), DVD, and On Demand February 22 from Lionsgate. From The Erwin Brothers (I Still Believe and I Can Only Imagine) and screenwriters Jon Erwin (I Still Believe and I Can Only Imagine) & David Aaron Cohen (Friday Night Lights) and Jon Gunn (I Still Believe), the film stars Zachary Levi (Shazam!, Thor: The Dark World, Tangled), Academy Award® winner Anna Paquin (Best Supporting Actress, The Piano, 1993; X-Men franchise, The Irishman), Ser’Darius Blain (Jumanji: Welcome to the Jungle, Jumanji: The Next Level, “Charmed”), and Primetime Emmy® Award nominee Dennis Quaid (Outstanding Lead Actor in a Miniseries or Movie, The Special Relationship, 2010; The Day After Tomorrow, Far From Heaven, In Good Company).

American Underdog tells the inspirational true story of Kurt Warner (Zachary Levi), who went from a stockboy at a grocery store to a two-time NFL MVP, Super Bowl champion, and Hall of Fame quarterback. The film centers on Warner’s unique story and years of challenges and setbacks that could have derailed his aspirations to become an NFL player – but just when his dreams seemed all but out of reach, it is only with the support of his wife, Brenda (Anna Paquin) and the encouragement of his family, coaches, and teammates that Warner perseveres and finds the strength to show the world the champion that he already is. American Underdog is an uplifting story that demonstrates that anything is possible when you have faith, family and determination.

Based on the Book “All Things Possible” by Kurt Warner with Michael Silver. Screenplay by Jon Erwin & David Aaron Cohen and Jon Gunn. Directed by The Erwin Brothers.