The new projector will make its debut at CES 2018.

LG has announced its first 4K UHD projector model. The upcoming HU80K has already earned a CES 2018 Best of Innovation award, and will be on hand at the show next week.

"LG's first-ever 4K UHD projector represents the pinnacle of innovation in the portable entertainment market," said Tim Alessi, head of product marketing at LG Electronics USA. "Offering superb brightness coupled with a design that offers true versatility, the new HU80KA will lead the way in changing how consumers enjoy 4K content in their home and on the go." 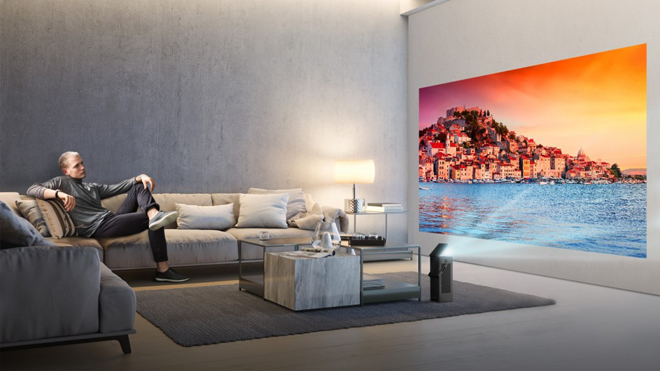 The new compact projector was designed with quality 4K performance and portability in mind, allowing users to bring their UHD entertainment to any room in the house. The device can project a 150-inch image with 2,500 lumens of brightness and uses a mirrorless I-shaped engine. This helps to enable the projector's compact form factor and upright design, allowing the unit to display images whether it's placed on the floor, wall-mounted, or hanging from the ceiling. In addition, the HU80K also supports high dynamic range content using the HDR10 format. Two 7W speakers are included as well, but users can opt to connect external speakers or a sound bar through the projector's optical output, HDMI port, or Bluetooth wireless instead. Meanwhile, LG has also integrated its webOS 3.5 smart TV interface, offering access to several streaming services. Installation has been made flexible as well thanks to the projector's carrying handle and Auto Cord feature.

Exact pricing and availability for the HU80K 4K UHD projector have not been annouced yet, but the device will be demoed at the company's booth during CES 2018 in Las Vegas from January 9-12. And beyond the new 4K model, LG will also be showing off its latest Full HD MiniBeam Projector (model PF50K) with webOS 3.5.