Hisense has officially released its new 100-inch 4K Laser TV. And to help mark the occasion, the company invited us to attend a special launch event.

Held earlier this week at the Harman Store in NYC, the event included several demos highlighting the impressive TV's picture quality and versatility, along with appearances by Vice President of Hisense Group, Dr. Lin; US soccer legend, Landon Donovan; and famous soccer commentators, Men in Blazers.

"It's time to rethink TV," said Dr. Lin, Vice President of Hisense Group. "In addition to an unapologetically amazing viewing experience, the Hisense Laser TV can be easily incorporated into any home environment as it does not require a special darkened environment or cumbersome equipment. The thin, lightweight, 100" screen hangs effortlessly and elegantly, complementing any space or design style."

Serving as a kind of middle-ground between a standard large-screen TV set and a standalone projector system, the Hisense 4K Laser TV is designed to offer a premium big-screen viewing experience with integrated smart TV apps, OTA support, and Harman audio. And after checking the device out in person, it seems to be fulfilling that promise quite well.

Not really a traditional television at all, the $9,999 Hisense 4K Laser TV actually uses an ultra-short throw projector unit powered by a Texas Instruments DLP 4K UHD DMD chip and Hisense’s proprietary light source technology to deliver more than 8 million pixels and 20,000 hours of playback -- all with the unit placed just inches from the wall. Likewise, the system includes a super-thin, lightweight, 100-inch Screen Innovations Anti-Glare Screen with a simple wall-mounting solution for easy installation without wires.

HDR10 playback support with up to 300 nits and 3,000 lumens of brightness is provided as well, along with standard Rec. 709 color gamut coverage. With that said, the current model does not offer wide color gamut support or Dolby Vision capabilities, though Hisense is planning to implement those features in the company's next generation model. 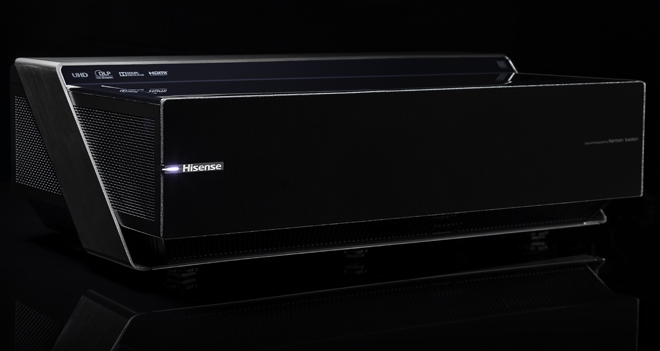 Under the hood, the Laser TV unit itself also includes an integrated custom-designed Harman 2.1 audio system with 5 built-in speakers and a separate 6.5-inch wireless subwoofer. A TV tuner for over-the-air content is featured as well, along with Hisense's smart TV platform with access to apps like Netflix, Amazon Video, Pandora, TikiLIVE, YouTube, and more (HDR playback is currently only supported for Netflix and YouTube). Finally, two HDMI 2.0a connections are provided as well for external sources like an Ultra HD Blu-ray player or AV receiver.

This all comes together to create a unique premium large-screen display solution suitable for casual and home theater viewing conditions -- blending some of the ease and versatility of a conventional TV setup with the large-screen performance of a projector system. 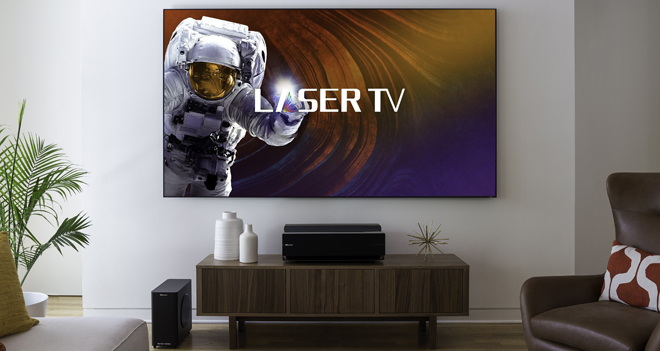 Here's a full rundown of key specs and features per Hisense:

To show off the Laser TV in person, Hisense had the system set up in several different rooms throughout the Harman Store, presenting an assortment of lighting and viewing conditions with different types of content -- all designed to highlight the TV's versatility.

The first room I demoed featured a dim environment with a little bit of blue/purple ambient light filling the space. A 4K HDR reel of gorgeous landscapes, vistas, and cities played on the TV, and the content looked quite nice under these conditions with sharp textures, bright contrast, and rich colors. The screen itself was neatly mounted to the wall and the projector was placed atop a TV stand below the screen, just inches from the wall -- resulting in a clean, minimalist setup. 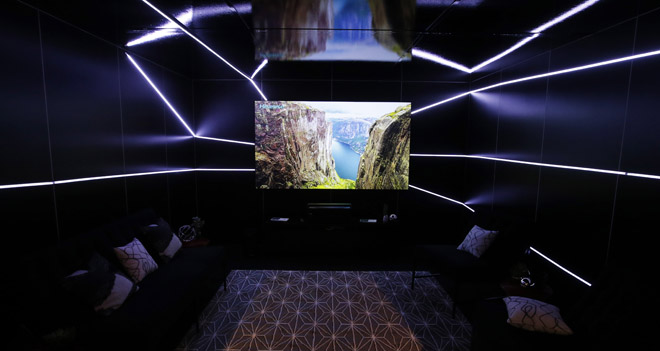 Another nearby area featured a bright living room configuration with more conventional overhead lighting. For this demo, the TV played back a reel of snowboarding footage and though the image did look just a little washed out compared to the TV's performance in the darker room, the icy mountain still maintained bright whites with each powdery speck of snow visible across the 100-inch screen.

To further showcase the TV's performance in more casual settings, another bright room demo was offered. This time, a reel of soccer footage was played on the screen. Again, colors and contrast did take a slight hit when playing in these lighter environments, but the picture was still more than bright enough to remain clearly visible and color performance remained solid. The players' red uniforms were particularly punchy, and motion was always smooth as they made their way across the field. 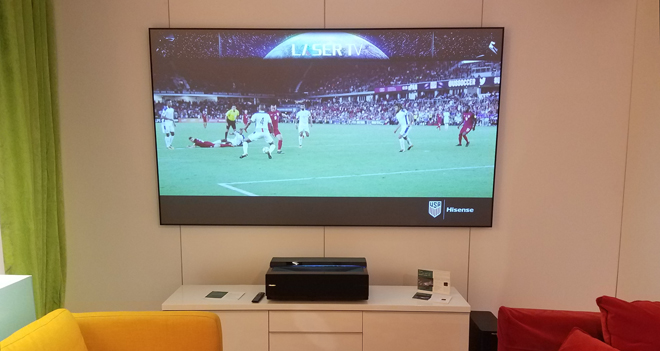 But while bright room performance is important for any TV, nothing beats a completely dark room for the best movie playback. With that in mind, Hisense had one final demo set up downstairs in Harman's dedicated home theater room. And for this demonstration, the company stepped things up a notch, swapping out the included 100-inch screen for a larger 136-inch screen. The pitch black environment allowed the projector to really show off what it can do, and though there were some minor quirks, the results did not disappoint.

For demo purposes, Hisense played back Lucy starring Scarlett Johansson, and the movie looked fantastic with sharp fine details and pleasing colors. Viewing angles were also particularly impressive, as I didn't really notice any major hit in quality when viewing toward the sides of the room. With that said, I've seen scenes from this particular movie several times on other traditional 4K HDR displays, including models from LG and VIZIO, and the Laser TV's standard color gamut and relatively limited nit output lacked some of the pop found on those other sets. Of course, the 136-inch screen size offered here provided a level of immersion those standard sized models simply could not achieve. 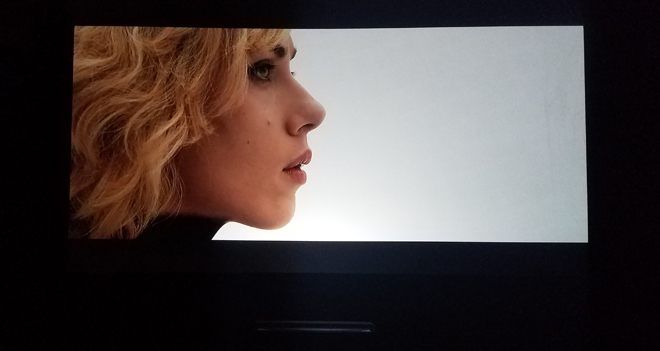 Overall contrast was also quite good with bright whites and solid blacks, but the letterbox bars above and below the image were just a tad noticeable, failing to achieve the inky quality that OLED displays and the best local dimming LCD displays are capable of. Likewise, uniformity was mostly good, but there was a faint bright spot on the bottom center of the screen just above the projector unit, which elevated the blacks just a hair in that specific area. This would likely be unnoticeable with 1.78:1 or 1.85:1 material, but the letterbox bars brought more attention to it.

Finally, the home theater environment also allowed Hisense to show off the system's integrated Harman speakers and wireless subwoofer. And though the volume appeared to be maxed out, the system filled the relatively large theater room well, offering a deep sound with solid stereo separation. There was a minor booming quality during more aggressive moments, but overall the system sounded on par with similar sound bar units, offering performance leaps and bounds better than typical integrated TV speakers.

Blending much of the simplicity of a standard smart TV set with the immersion of a projector system, the Hisense 4K Laser TV presents an enticing option for users who want a more enveloping viewing experience without sacrificing ease of installation. The system's picture quality was quite strong during the various demos, offering good home theater performance and very solid bright room playback. With that said, the unit's lack of wide color gamut support and fairly limited nit output won't offer the best 4K HDR playback -- though the added screen size might make up for that loss depending on your priorities.

There are less expensive 4K TVs (albeit with smaller screens sizes) and standalone projector models (albeit not short-throw) on the market with more advanced picture quality features, but the projector/screen/smart TV/speaker combination here is pretty unique, immersive, and convenient. While I'd need more one-on-one time with the system to make a full judgement, based on these initial impressions, the Hisense Laser TV should be a definite contender for users looking for a 100-inch or larger 4K TV solution.

Hisense's 4K Laser TV is now available from retailers nationwide for an MSRP of $9,999. 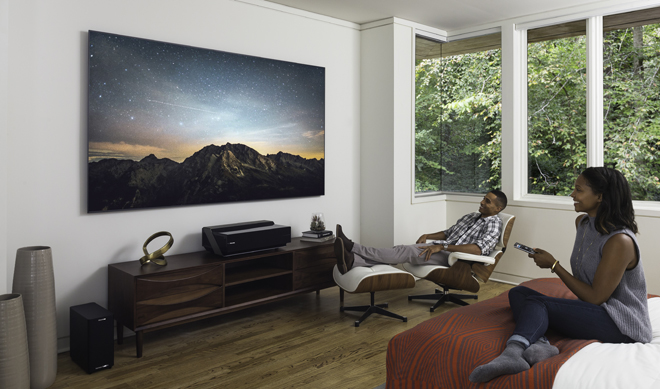