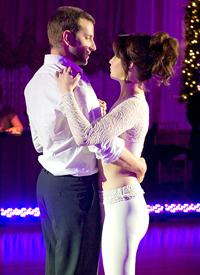 Last month we spotlighted a noir mystery with an animated twist, a controversial historical thriller, and a visually stunning examination of survival. If you haven't already, be sure to check out the Essential Picks for November, December, January, February, and March.

This month, we're covering an unconventional romance, a revisionist "spaghetti southern," and a harrowing story about familial bonds and hope. Please be aware, that if you haven't already seen them, there might be some spoilers for the films listed.


'Silver Linings Playbook' - Much more than just that movie with all that "ho heying" in its trailer, David O. Russell's Oscar nominated film is a romantic dramedy with a refreshing edge. Avoiding most (but not all) of the clichéd tropes that plague its genre, the movie's characters feel fresh, and there is real insight layered within the drama and humor that helps the film dance into the hearts of even its most jaded viewers.

Through the story of two broken individuals who find common ground within their mutual distress, Russell taps into a very raw component of humanity. The film's examination of mental illness is multifaceted, finding both sorrow and humor in dysfunction without ever being too flippant or heavy handed. Granted, it's not exactly 'A Woman Under the Influence' when it comes to nuance, complexity, and realism, but Russell's display of sensitivity and honesty with the material is commendable. Not afraid to delve into some potentially dark and unsettling realities, the director doesn't shy away from the hardships his characters' face, nor does he ignore their joys and triumphs, lending the film some genuine bite in both content and cinematic form -- something that most of its genre contemporaries sorely lack.

In her much deserved Academy Award winning performance, Jennifer Lawrence easily cements herself as one of the best actresses working today. Fearless and unfiltered, her manic, spirited portrayal of Tiffany is like a force of nature, oscillating between feisty vigor and devastating vulnerability. There's a palpable level of electricity to her on-screen presence as her character rides a rogue wave of mixed temperaments. Her breakdown in the diner sequence is particularly impressive, unleashing a honed in display of unbridled emotion bursting into fits of passion, frustration, and pent-up fury. Though slightly up-staged by his co-star, Bradley Cooper is also very impressive as Pat, filling the character with a likeable, earnest positivity that's dashed by dangerous anger. They're both wholly flawed and damaged human beings, scarred by trauma, loss, and heartache, and both performers lend their grief real weight and surprising levity. Despite their fifteen year age gap, the pair shares completely natural chemistry, and one never thinks twice about their potential coupling. When they're on screen together, they simply fit -- even when they're nearly at each other's throats. Actually, especially when they're nearly at each other's throats.

As atypical and multi-layered as Russell's approach is, the film does falter slightly here and there. The scene where the climactic bet is made feels a little out of place, with some tonal choices that seem at odds with the rest of the picture. Likewise, the conclusion adheres to tried-and-true romcom sensibilities, and though the destination is disappointingly predictable compared to the more unconventional path that precedes it, the execution is more than strong enough to make it work. At the end of the day, this is really a film about optimism, but unlike other inferior efforts, it doesn't find its positivity through sugarcoated contrivance. It finds it through genuine struggles and pain and hard work. In other words… "Excelsior!"


'Django Unchained' - A spaghetti western about slavery. If it was directed by anyone else, I might have outright balked at such a notion, but under the insane guiding hand of Quentin Tarantino, this precarious concept becomes a pitch-perfect piece of cinematic exploitation. A stylistic throwback remixed with modern sensibilities, 'Django Unchained' is pure motion picture bliss. Fueled by an incredible soundtrack, amazing performances, playful wit, sumptuous dialogue, and wavering pangs of over-the-top cartoon violence and disturbing savagery, the flick is an impossibly bloody and richly verbose gunshot of filmic excess, carefully concentrated into an engaging and wholly satisfying story of revenge.

After his star making turn in 'Inglorious Basterds,' Christoph Waltz reteams with Tarantino, and this time the pair create a character on the complete opposite end of the moral spectrum from the infamous Hans Landa. A perfectly mannered, surprisingly cordial and business-like bounty hunter, Dr. King Schultz is an utterly likeable killer marked by a high code of ethics. A softie at heart, he gets swept up in Django's romantic quest, risking everything to reunite the former slave with his beloved Broomhilda (Kerry Washington). Sickened by the cruel realities of slavery, the man is slowly unraveled by the hellish horrors he sees, revealing his one, sadly fatal flaw… his conscience.

In the title role, Jamie Foxx oozes cool and icy determination. Willing to do anything to save his wife, the character exposes a sometimes unsettling level of fortitude, begrudgingly accepting injustice in order to free his love. Unlike Schultz, he really is willing to walk through hell to get what he wants. Making that hell a reality, is Leonardo DiCaprio in the part of the gleefully detestable Calvin Candie. A very special kind of evil, Candie is like an overgrown spoiled child, selfish and without morals. DiCaprio essentially disappears into the role, displaying so much dedication that he apparently went so far as to literally bleed for the movie.

Violent, disturbing, exciting, funny, and unabashedly entertaining, 'Django Unchained' is a true cinematic anomaly. Tarantino's approach to the potentially controversial content really has no right to work, and yet it does. Through a perfectly balanced mixture of spaghetti western, old school exploitation, revenge thriller, over-the-top action, crackling dialogue, and fully realized characters, the director funnels all of his disparate influences into something bizarrely unique. One could argue (very justly) that a topic like slavery shouldn't be dealt with in such an ostensibly immature manner, but Tarantino's command of tone and style is so secure and tight that it somehow works -- bringing thrills, laughs, and genuine emotion to the story. An explosive culmination of all of the director's varied sensibilities and inspirations, the film is among his very best work, and it easily earns a spot on this month's must own list.


'The Impossible' - An intense, inspirational film about love, hope, and endurance, 'The Impossible' is a non-stop, unrelenting roller coaster of emotion. Through one family's true story of survival, the filmmakers reveal mankind's universal propensity for compassion and unity in the face of unimaginable crisis.

While director Juan Antonio Bayona technically spends very little time setting up the characters and relationships, he uses this comparatively quick preamble to say so much with so little. Economic but potent, these early scenes perfectly establish the family through key interactions, giving the audience just enough to latch onto throughout the following chaos. Brilliantly juxtaposing the peaceful stillness that comes before and after, the tsunami sequence itself is simply horrifying, creating a breathlessly visceral experience that is uncomfortable, disorienting, and frequently painful to watch. Using a mixture of heavy practical effects with fairly minimal CG compositing and embellishments, the rushing waters and raging debris carry a distressing level of reality.

Getting swept up in this violent onslaught, Naomi Watts is simply incredible, turning in an equally primal and affectionate performance as Maria, the mother of three who fights to survive. Nearly torn apart by the disaster, she somehow clings to life, determined to care for her son Lucas (Tom Holland), while her husband (Ewan McGregor) and two other children remain missing and presumed dead. Of course, her wounds make this task incredibly difficult, forcing an occasional role reversal where Lucas has to become the protector and leader. As the character states in the movie, they "took care of each other." To this end, Holland is actually called upon to carry the film during several stretches, and the young actor does an exceptional job. Faced with unrelenting confusion and chaos in the wake of the tragedy, both mother and son do everything they can to not only help each other, but fellow survivors as well. Throughout it all, Bayona maintains a heart-tugging air of inspiration and emotion, and while his methods occasionally veer toward excess sentiment and dramatic contrivance, the core of the story is so powerful and harrowing that these slight oversteps become easily forgivable.

Some have criticized the filmmakers for focusing on white characters and changing the nationality of the protagonists, and while these concerns certainly have merit, judged for what it is, the movie remains a rather striking piece of cinema -- both from a technical and an emotional level. As the real-life Maria imparts in the included special features, this is a film about "people helping people," and on that front, it succeeds wholeheartedly. With incredible, disturbing visuals and powerfully immersive audio, the Blu-ray itself offers a fully enveloping experience that totally engulfs the audience in the characters' plight. This isn't always an easy movie to watch and there are some issues here and there, but the filmmakers and actors do the inspirational story justice, helping to cement this disc a spot on this month's essential picks.

So, there you have it. While there are many titles worth picking up this April, those are our top three must own recommendations. We'll be back next month with three more essential picks, but for now, what do you think of our selection? What are your choices for April's must own titles?

Watch the latest Hollywood releases from the comforts of home.

Paramount Home Entertainment rolling out Tom Cruise blockbusters on 4K Disc in May.