The first season of the comedy TV series starring Danny McBride and Walton Goggins is headed for Blu-ray in February.

In an early announcement to retailers, HBO is working on 'Vice Principals: The Complete First Season' for Blu-ray on February 7.

Specs have yet to be revealed, but supplements include Hilarious Blooper Reel; Multiple Audio Commentaries; and more...

You can find the latest specs for 'Vice Principals: The Complete First Season' linked from our Blu-ray Release Schedule, where it is indexed under February 7. 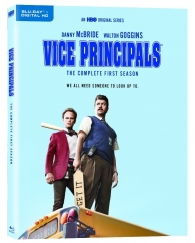