The second season of the Cinemax drama is scrubbing in for Blu-ray in August.

In an early announcement to retailers, HBO is preparing 'The Knick: The Complete Second Season' for Blu-ray on August 2.

A series of misfortunes leaves the Knick facing a state of upheaval in Season 2 of Steven Soderbergh's Emmy(R)-nominated series. With Thackery (Clive Owen) away to treat his cocaine addiction, a dearth of affluent patients and financial missteps plaguing the NYC hospital, the board decides to relocate uptown. Meanwhile, gifted black surgeon Algernon Edwards (Andre Holland) jockeys to become Thackery's successor as Chief of Surgery as the rest of the staff grapples with numerous challenges, both at work and in their private lives.

You can find the latest specs for 'The Knick: The Complete Second Season' linked from our Blu-ray Release Schedule, where it's indexed under August 2. 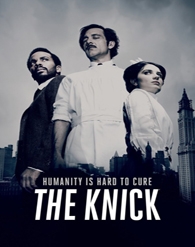 Discs mentioned in this article: (Click for specs and reviews)
The Knick: The Complete Second Season (Blu-ray)