The second season of the Cinemax action series will arrive on Blu-ray in December. You can pre-order the show here.

In an early announcement to retailers, HBO is preparing 'Banshee: The Complete Second Season' for Blu-ray on December 30.

From executive producer Alan Ball, creator of 'True Blood,' this Cinemax action drama charts the continuing twists and turns that follow Lucas Hood (Antony Starr), an ex-convict who improbably assumes the identity of sheriff of the rural, Amish-area town of Banshee, where his former lover and partner-in-crime (Ivana Milicevic) lives under her own alias, Carrie Hopewell. Season 2 takes up immediately after the S1 finale, when Carrie’s father, gang kingpin Rabbit (Ben Cross) was left for dead after a climactic warehouse shootout. Carrie, now exposed and estranged from her husband and kids, is torn between her devotion to her family and her connection to Lucas, who had given himself up in order to save her years earlier.

The new season finds Lucas, having escaped detection after being interrogated by FBI agent Jim Racine (guest star Zeljko Ivanek), with his hands fuller than ever as sheriff, dealing with (among other things) the murder of a Kinaho tribe girl, the continuing escalation of tensions between Amish overlord Kai Proctor (Ulrich Thomsen) and Kinaho tribe leader Alex Longshadow (Anthony Ruivivar), and the unwelcome appearance of a surprise visitor: the reprobate son of the real (dead) Lucas Hood.

The Blu-ray will feature 1080p video, a DTS-HD MA 5.1 soundtrack, and supplements will include: Inside the Title Sequence: Uncover the clues behind each episode's opening title sequence with this interactive feature; Twitter Commentary with Cast & Crew: Take a look back at the cast and crew of Banshee live tweeting during the season premiere and finale; Banshee Origins: Find out the story before the story with a dozen prequel videos featuring the cast of Banshee; Conversation Between Olek & the Albino: See both sides of Olek and the Albino's phone call from Banshee Origins; Zoomed In: Episodes 1-4 & 6-8: Go on set with the cast to see how key adrenaline-filled scenes were created; Audio Commentaries with Cast & Crew; Deleted Scenes; Episode Recaps; and Trailers.

You can find the latest specs for 'Banshee: The Complete Second Season' linked from our Blu-ray Release Schedule, where it's indexed under December 30. 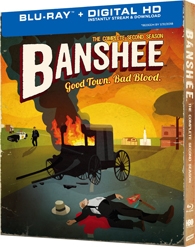 Discs mentioned in this article: (Click for specs and reviews)
Banshee: The Complete Second Season (Blu-ray)