Poor Nicolas Cage Gets 'Left Behind' on Blu-ray this January

The action-thriller co-stars Chad Michael Murray and Jordin Sparks. Pre-orders for the Blu-ray are now available.

In an early announcement to retailers, Entertainment One is preparing to release 'Left Behind' on Blu-ray on January 6.

The movie stars Academy Award winner Nicolas Cage (NATIONAL TREASURE, CITY OF ANGELS, THE CROODS) as veteran pilot Ray Steel. After millions of people around the globe disappear in the Biblically prophesied rapture, Ray must fight to protect the passengers that remain on his flight. Trapped at 30,000 feet, he must find a way to safely land the damaged plane and comprehend the chaos that awaits as the most devastating event in history unfolds.

Specs have yet to be revealed, but supplements include: Behind the Scenes Featurette and Slideshow; Interviews with Cast and Crew; Author’s Reflections; Films to Believe In; Promotional Videos; and Official Trailer.

You can find the latest specs for 'Left Behind' linked from our Blu-ray Release Schedule, where it is indexed under January 6. 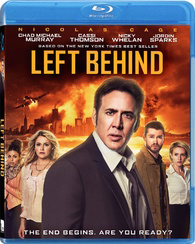