The sweeping romance starring Michael Fassbender and Alicia Vikander will arrive on Blu-ray in January.

In an early announcement to retailers, DreamWorks is preparing 'The Light Between Oceans' for Blu-ray on January 24.

Lighthouse keeper Tom Sherbourne (Michael Fassbender) and radiant, spirited Isabel (Alicia Vikander) live together in married bliss on a remote, rugged island off the coast of Australia. But their windswept world is turned upside down when Isabel learns that she’s unable to bear a child. One day, a drifting lifeboat washes ashore with a crying baby in it. The dilemma the couple now face will echo far beyond the island, engulfing and irrevocably impacting their world – and that of a stranger (Rachel Weisz) – in a passionate story about love, hope, and a fateful choice.

You can find the latest specs for 'The Light Between Oceans' linked from our Blu-ray Release Schedule, where it's indexed under January 24. 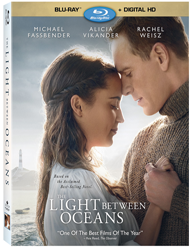 Discs mentioned in this article: (Click for specs and reviews)
The Light Between Oceans (Blu-ray)