The 2014 César winner for production design arrives on Blu-ray in November. Pre-order your copy here.

In an early announcement to retailers, Drafthouse Films is readying 'Mood Indigo' for Blu-ray on November 11.

He soon meets Chloé (Tautou) and before they know it, they're dancing to Duke Ellington and plunging headfirst into a romance that Gondry rapturously depicts as only he can. Their whirlwind courtship is tested when an unusual illness plagues Chloe: a flower begins to grow in her lungs. To save her, Colin discovers the only cure is to surround Chloe with a neverending supply of fresh flowers.

The 2-disc Blu-ray set will feature both the extended and director's cuts of the film with 1080p video, lossless audio, and supplements include Director's Cut and Extended Cut of the film, Behind-the-scenes featurette: "Inside the Mind of Michel Gondry", Featurettes on set creation, costumes, book to film, Deleted scenes, 36-page booklet, and Theatrical trailer.

You can find the latest specs for 'Mood Indigo' linked from our Blu-ray Release Schedule, where it is indexed under November 11. 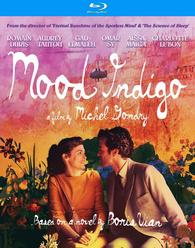