The immersive audio format continues to expand to more theaters and films.

Dolby has announced two milestones for its Atmos audio technology, including the installation of 2,000 Dolby Atmos enabled cinema screens and the release of 500 movie titles mixed in Dolby Atmos. The object-based surround sound format first debuted in 2012 with the release of Disney•Pixar's 'Brave.'

"When Brave was released in 2012, Dolby Atmos enabled us to bring audiences into the rich and fantastic world of Merida through their execution of previously inaccessible soundscapes," said Mark Andrews, writer and director of Disney•Pixar’s Brave. "Dolby Atmos enables our creatives at Pixar to tell stories with sound, taking audiences across new dimensions of entertainment. As one of the first to use Dolby Atmos, we have witnessed this platform’s steady growth and value as an essential element for the next-generation filmmaker."

Dolby Atmos object-based audio allows filmmakers to precisely place and move effects anywhere in a three-dimensional space, creating an immersive surround sound experience with overhead audio. The technology is also a part of Dolby Cinema, which incorporates the Dolby Vision laser projection system to deliver high dynamic range images with expanded colors and enhanced contrast. Currently, there are more than 50 Dolby Cinema locations around the globe.

"Dolby has made its mark on what consumers can expect from a powerful sound experience, and Dolby Atmos continues to shape the future of entertainment for any environment," said Curt Behlmer, Senior Vice President of Content Solutions and Industry Relations, Dolby Laboratories. "Dolby Atmos is considered the preferred sound format by many who look to deliver the best in sound to the cinema, in the home, or on the go, and the possibilities are endless."

"By breaking the link between sound design and specific speaker layout, Dolby Atmos has really opened up the creative use of sound to deliver more immersive entertainment experiences," said Avi Greengart, Research Director for Consumer Platforms and Devices, Current Analysis. 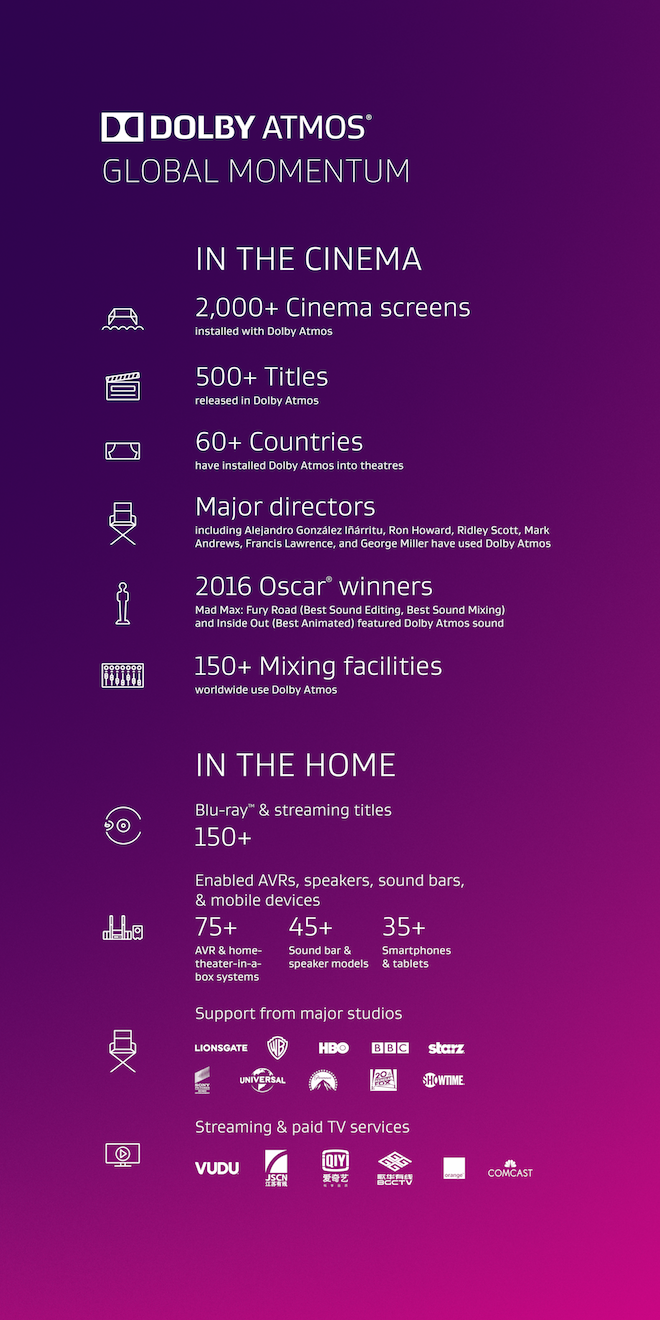