If you're near, or planning a trip to, Disney's California Adventure (Anaheim) or Disney's Hollywood Studios (Orlando), you can preview the first ten minutes of Disney-Pixar's Incredibles 2. Written & directed by Brad Bird, Incredibles 2 sees the Parr family dynamic tipped upside down as Elastigirl (aka Helen Parr) heads off to fight crime while Mr. Incredible (aka Bob Parr) stays home to take care of the super kids, Violet, Dash, and Jack-Jack.

After a quick introduction by Samuel L. Jackson (embedded above), Incredibles 2 picks up exactly where the first Incredibles left off -- The Underminer, a mole-themed super-villain, punching up into the middle of the city with a building-sized tank-drill, threatening lives and property as he smashes through the city. Structurally echoing the first film, the story intercuts an interview -- this time of a teenage boy with a crush on Violet -- with building action before unleashing a spectacular set-piece. The joke here is that every Incredible wants to help stop the Underminer, but somebody's gonna get stuck watching Jack-Jack, so they all end up playing hot potato with the giggling super-baby while battling the Underminer and his rampaging machine.

It's impossible to say how well Incredibles 2 will work as a whole film, but if these first ten minutes are any indication, Brad Bird has delivered another exhilarating superhero movie that perfectly balances family emotions, clever comedy, and thrilling comic book movie set-pieces. It's been 14 years since The Incredibles first graced silver screens (remember when movie theaters used to project actual FILM?), but it feels more like 14 minutes. The Incredibles universe has always been timeless -- the vehicles and architecture evoke 1960s Americana, but the technology seems more modern -- and that wonderful sense of style returns, beautifully rendered by Pixar's digital wizards. I also loved how each family member gets a little moment to shine, showing off, as well as reminding us of, their individual powers. Even Frozone makes an appearance to help out with a derailing train. I don't want to over-hype this for you, but it feels so good to be back in this universe, and this opening set-piece is more thrilling, funnier, and better staged than most superhero movie climaxes. I can't wait to see the whole movie. 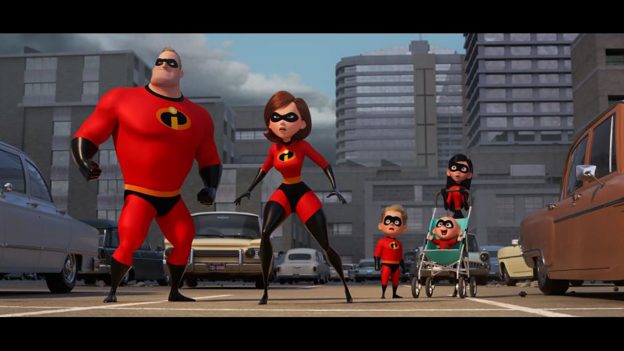 While the soundtrack specifics are unknown, this Disney Sneak Peek was projected not only in 3D, but with a multi-screen and multi-sensory presentation. If you've seen a movie in 4DX, or enjoyed Disney park productions like Captain EO, Honey, I Shrunk the Audience!, or Muppet Vision 3D, you know what I'm talking about. For those who do not, here's what happens -- when characters entered or exited the frame from the right or left, side screens would illuminate to the sides of the audience, revealing unique animation and making it feel like we were surrounded by the movie. Further, while there were no rumbling seats, there were a few moments where we were sprinkled with liquid to evoke a splash. (Personal note: it was my daughter's first time in a movie theater and she LOVED it).

The Incredibles 2 3D presentation is a stunner as well. With sharp imagery and vivid colors, the stereo effects were deep and lifelike -- creating that window into another world effect, drawing us into the action and really selling the camera's framing as well as each character's capabilities. Elastigirl streeeeeeeetches herself out into infinity while the Underminer's drill seems all the more massive because we can look down its elongated construction. There's a grand sense of scale and scope on display, yet nothing seems blurry or rushed. Quite simply, it might be the best 3D I've seen since Jungle Book, Pacific Rim, or Mad Mad Fury Road.

Incredibles 2 doesn't open until Thursday, June 14th, but if you're in Southern California or Orlando before then, be sure to check out the first ten minutes of the movie (this is no extended trailer). Though we've only seen 10 of the film's 118-minute runtime, Brad Bird and his collaborators are firing on all cinematic cylinders, dropping audiences back into the incredible Incrediverse with a jaw-dropping opening action sequence that perfectly balances thrills and laughs. It's a marvel of modern filmmaking and I can't wait to see the whole thing.

Oh, and for 4K enthusiasts, the original Incredibles debuts on 4K Ultra HD Blu-ray next month.