Catch up on all the major news from Disney's recent D23 Expo!

Disney's latest D23 Expo was held this past weekend at the Anaheim Convention Center in California. As part of the event, the studio announced new details on a variety of its upcoming big-screen projects, including titles from Marvel, Lucasfilm, Pixar, and Disney's own live action and animated branches. Likewise, the company also unveiled its lineup of new streaming films and shows for Disney+.

"You're not just fans, you're family," said Alan Horn, co-chairman and chief creative officer of The Walt Disney Studios, to attendees at the expo. "It's because of you that we keep working so hard to make great movies, and we love D23 Expo because it’s where we can share them with you first."

Here's a rundown of some of the major film titles highlighted at the expo:

Black Panther 2 (Marvel Studios) - Though plot details have not been revealed yet, Marvel did officially announce a May 6, 2022 release date for Black Panther 2. Ryan Coogler, who helmed the Oscar-nominated first film, will return to direct the sequel. 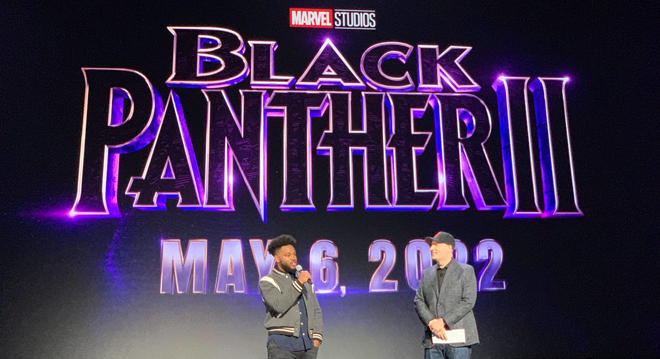 The Eternals (Marvel Studios) - Following the film's initial reveal at Comic Con last month, Marvel announced several new cast member for The Eternals at D23. Gemma Chan and Barry Keoghan will play Eternals named Sersi and Druig respectively. Meanwhile, Kit Harington (Game of Thrones) has signed on to play a non-Eternal character named Dane Whitman. In the comics, Whitman is also known as the superhero Black Knight. The film is set to hit theaters on November 6, 2020.

Black Widow 2 (Marvel Studios) - Starring Scarlett Johansson as Natasha Romanoff, Black Widow is set to kick off Marvel's Phase 4 on May 1, 2020. Footage from the upcoming film was shown at the event, but sadly, the teaser has not been posted online yet. With that said, artist Andy Park did post a look at the official D23 poster he painted for the project. Check it out below!

BLACK WIDOW!!! Official D23 poster I had the honor of painting. She’s very near & dear to me since it’s the gazillionth time I’ve concept designed/painted her. What a cast & crew! #BlackWidow @MarvelStudios #ScarlettJohansson @Florence_Pugh @DavidKHarbour #RachelWeisz @DisneyD23 pic.twitter.com/fxMOI4fJ5R

Star Wars: The Rise of Skywalker (Lucasfilm) - Several members of the cast and crew were on hand at the expo to present a brand new special look teaser for the movie. The conclusion to the Skywalker saga will premiere in theaters on December 20, 2019.

Jungle Cruise (Disney Live Action) - Inspired by the classic Disney theme park ride, the upcoming film stars Dwayne Johnson as riverboat captain Frank Wolff, and Emily Blunt as Dr. Lily Houghton. Footage from the movie was shown to the audience, but it has not been posted online. Jungle Cruise is directed by Jaume Collet-Serra and is scheduled to arrive in theaters on July 24, 2020.

Cruella (Disney Live Action) - Disney has revealed the first image from the movie, depicting a young version of Cruella de Vil as played by Emma Stone. The character originated in the 1961 Disney animated film, 101 Dalmatians, and the new live-action prequel is said to feature "a fresh, 1970s, punk-rock approach." Emma Thompson is also attached to star, and the movie is being directed by Craig Gillespie (I, Tonya). Cruella will premiere on May 28, 2021. 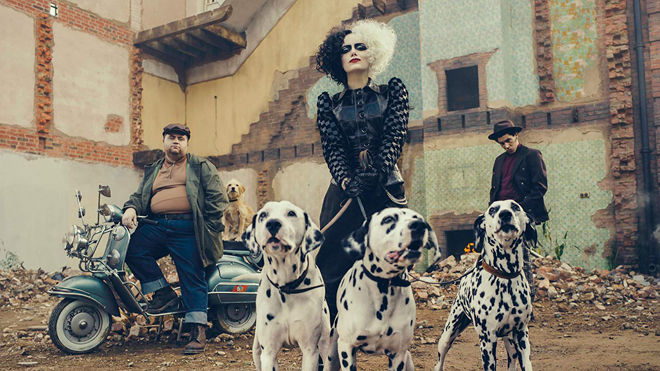 Maleficent: Mistress of Evil (Disney Live Action) - Star Angelina Jolie presented exclusive footage at the show for the upcoming sequel to 2014's Maleficent. Click here to check out the previously released trailer. The film will hit theaters on October 18, 2019.

Mulan (Disney Live Action) - Director Niki Caro showed off new material from the new live-action adaptation of Disney's animated Mulan (1998). The new footage has not been posted online yet, but click here to check out the previously released trailer. Mulan is scheduled for March 27, 2020.

Frozen 2 (Walt Disney Animation Studios) - The film's cast and crew offered an exclusive preview of several new songs and scenes from the upcoming animated sequel. But while the new material hasn't been made public beyond the expo, click here to check out the previously released trailer. Frozen 2 opens on November 22, 2019.

Raya and the Last Dragon (Walt Disney Animation Studios) - The upcoming animated film tells the story of Raya, "a lone warrior from the fantasy kingdom of Kumandra who teams up with a crew of misfits in her quest to find the Last Dragon and bring light and unity back to their world." Awkwafina will play the voice of Sisu, the Last Dragon, while Cassie Steele will voice Raya. The movie is set for release in the US on November 25, 2020. 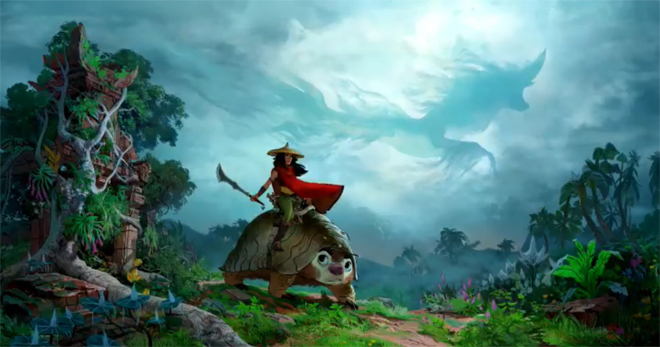 Soul (Pixar) - Directed by Pete Docter (Up, Inside Out), the film will focus on a "journey from the streets of New York City to the cosmic realms, discovering the answers to life's most important questions." Soul stars Ahmir Questlove Thompson, Phylicia Rashad, Daveed Diggs, Tina Fey, and Jamie Foxx. In addition, Jon Batiste will be composing original jazz music for the movie. The film is scheduled for release on June 19, 2020.

Onward (Pixar) - New footage from the movie starring the vocal talents of Tom Holland and Chris Pratt was shown at the event, but has not been released online. The film features "two teenage elf brothers, Ian and Barley Lightfoot, who embark on an extraordinary quest to discover if there is still a little magic left in the world." Onward will hit theaters on March 6, 2020. Check out the previously released trailer for the flick below!