The crime drama starring Michael Rooker is coming to Blu-ray in December.

As previously reported, Dark Sky Films is preparing 'Henry Portrait of a Serial Killer 30th Anniversary' for Blu-ray on December 6.

Henry: Portrait of a Serial Killer is a chilling profile of a cold-blooded killer that, 30 years after its historic festival premiere, has lost none of its power to shock. The film, loosely based on a true story, has been hailed as one of the most disturbing and terrifying examinations of mass murderers ever filmed. Henry (Michael Rooker, The Walking Dead) is a psychopathic drifter who has coldly murdered a number of people for no particular reason and without any remorse. Leaving bodies in his wake, Henry makes his way to Chicago, where his he settles into the run-down apartment of his drug-dealing former prison friend and occasional roommate Otis (Tom Towles). Also moving into the space is Otis's younger sister Becky (Tracy Arnold), who is fleeing her abusive husband. As she fends off her brother's incestuous advances, Becky finds herself attracted to Henry - unaware that he, along with Otis, are continuing their murderous rampage.

The Blu-ray will feature 1080p video sourced from a new 4K restoration and a new 5.1 soundtrack. Supplements will include:

You can find the latest specs for 'Henry Portrait of a Serial Killer 30th Anniversary' linked from our Blu-ray Release Schedule, where it's indexed under December 6. 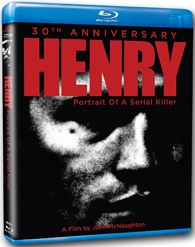 Discs mentioned in this article: (Click for specs and reviews)
Henry: Portrait of a Serial Killer - 30th Anniversary (Blu-ray)