'3 Hearts' Will Beat on Blu-ray in July

The French drama is heading to Blu-ray in July, and you can pre-order the film here.

In an early announcement to retailers, Cohen Media Group is preparing '3 Hearts' for Blu-ray on July 28.

A touching and tense drama about destiny, connections, and passion, '3 Hearts' presents a headily romantic look at a classic love triangle. One night in provincial France, Marc (Benoît Poelvoorde) meets Sylvie (Charlotte Gainsbourg) after missing his train back to Paris. Instantly and intensely drawn to one another, they wander through the streets until morning in rare, almost choreographed, harmony. A thwarted plan for a second meeting sends each in a separate direction Sylvie reunites with her ex and leaves France; Marc falls in love and marries. What neither knows is that Marc s new bride is Sylvie s sister, Sophie (Chiara Mastroianni). Upon Sylvie s return to France, the spark between her and Marc is reignited in ways that will forever alter the relationships between sister to sister and husband to wife.

Supplements have not been detailed yet, but the Blu-ray will feature 1080p video and a DTS-HD MA 5.1 soundtrack

You can find the latest specs for '3 Hearts' linked from our Blu-ray Release Schedule, where it's indexed under July 28. 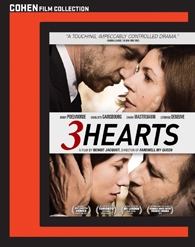 Discs mentioned in this article: (Click for specs and reviews)
3 Hearts (Blu-ray)