In an early announcement to retailers, the BBC is set to release 'The Hunt' on Blu-ray on September 6.

Produced by multi-Emmy-winning executive producer Alastair Fothergill (Planet Earth, Frozen Planet), The Hunt explores the remarkable strategies employed by hunters across the world, from hotrod ants in the boiling Namib Desert, where the sand temperature reached 158˚F – hot enough to melt the cameraman's boots – to polar bears of the frigid Arctic, filmed for the first time engaged in the mythical "meltwater pools hunt," using holes in the ice to steal closer to their prey. The BBC America series is loaded with both filming and technology "firsts," including the first time the world's smallest marine animal – the South American marine otters – have ever been filmed.

A celebration of nature's most determined, specialized and cunning predators and their equally cunning and elusive prey, The Hunt illustrates in dramatic detail the challenges animals face and the tactics they employ both on land and in the water, with each episode centering on one of our planet's key habitats.

Special features include: Making of The Hunt: This 50-minute making-of follows the crews as they capture some of the most memorable scenes from the series.

•The Hunt was the first to capture footage of tigers with a Cineflex, and not just from a jeep – they rigged an elephant with the camera in order to capture outstanding quality film of a tiger stalking and making a kill within the forest.
•The crew used a specialized rig comprised of a tiny camera on a lightweight crane that allowed them to 'fly' over army ants, capturing them for the first time in ultra-slow-motion (120 frames per second). This is also the first time a full raid on another ant colony has been filmed.
•The Chiroteuthis squid typically lives between 300-1000m deep – the pressure at this depth is enough to snap human bones. Because their natural habitat is so cold and dark, the crew had to recreate these conditions in a specially refrigerated room and film them under infrared lights.

•Until now only a handful of underwater shots of the planet's largest predator – the blue whale – existed, and none showed the full 90 feet of this animal in ultra-high definition. The crew spent 56 days at sea, from dawn till dusk, searching for whales with the goal of capturing them feeding. After 560 hours of work the success of the shoot came down to a spectacular seven minute feeding event on just one day.
•The Darwin's bark spider was only described by scientists in 2010 and has never been filmed for broadcast before. Like a real life Spiderwoman, females can spray silk in one continuous strand a distance of 25 meters in order to create a bridging line across a river from which they can hang their web. The bridging line is no ordinary silk, as its incredible elasticity makes it the strongest natural fiber on the planet – 10 times stronger than Kevlar, the material used in bullet proof jackets.
•An Assistant Producer witnessed arctic foxes adopting a new strategy for capturing nesting Arctic little auks. There is little cover on the scree slopes beneath the cliffs, and the foxes run at the auks directly knowing they will be seen and the auks will take flight. This did not bother them as the crew observed a fox curling up into a ball and staying very, very still waiting for the moment when the auks' attention was diverted by another predator. As the auks came in to land they forgot the fox was there, until it leapt vertically into the air to pluck an auk out of the sky. This behavior was captured by the crew for the first time.

You can find the latest specs for 'The Hunt' linked from our Blu-ray Release Schedule, where it is indexed under September 6. 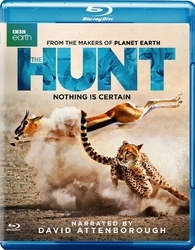