HDR10+ content is now available through Amazon Prime Video, and we've got some first impressions via Samsung's newest flagship display.

Developed in partnership with Samsung, Panasonic, and 20th Century Fox, HDR10+ is a new open, royalty free platform for high dynamic range video and displays. Building upon the static HDR10 format, the tech uses dynamic metadata to adjust brightness levels, color saturation, and contrast on a scene-by-scene or even frame-by-frame basis, producing images that are closer to the director's intent.

HDR10+ support is currently available on Samsung 2017 and 2018 4K HDR TVs via Amazon Prime Video streaming. And since Samsung was kind enough to send over a loaner for their new flagship 65-inch Q9 QLED HDR TV (full review coming soon), we thought we'd offer some first impressions of the format based on what we've seen so far.

That said, at the moment, HDR10+ content and devices are still limited to just one streaming service and one manufacturer in the US, which makes direct comparisons to other HDR formats a bit tricky. As such, these impressions are not meant to provide any kind of definitive evaluation of the tech or how it stacks up to other platforms. Instead, this is just meant to serve as our initial reaction to the content that's out there now, and we'll be sure to reevaluate as support expands to more services and devices.

According to Amazon, all of Prime Video's HDR movies and shows are now available to stream in HDR10+ on supported Samsung displays. Sadly, however, the company doesn't exactly make it easy to verify this fact. While Amazon's website states that a specific "HDR10+" label is supposed to appear in the video details for applicable titles, this is not actually the case. Instead, customer service confirmed that Prime Video is still just using a universal "HDR" badge for all high dynamic range content regardless of the format. Likewise, the Samsung Q9 doesn't offer any kind of specific indicator that it's playing HDR10+ video either.

I know this omission might not seem like a big deal, but given the often subtle yet valuable improvements dynamic metadata can provide over static metadata HDR, OCD home theater enthusiasts like myself can't help but desire a clear indication that the format is indeed coming through correctly on a display.

Still, Amazon assured me that all Prime HDR videos do indeed automatically play in HDR10+ on supported Samsung TV models like the 2018 Q9. With that in mind, I checked out a variety of Amazon Prime Original series, including episodes of The Tick, Philip K. Dick's Electric Dreams, The Grand Tour, and Mozart in the Jungle, along with Amazon Prime Original movies like Manchester by the Sea and Last Flag Flying.

In general, all of the content I streamed looked rather gorgeous offering some of the punchiest HDR imagery I've seen on any streaming service, seemingly pushing highlights a bit further than most of the Netflix HDR10 shows I watched on the same TV.

Mozart in the Jungle was actually the very first thing I demoed after unpacking the Q9, and the series provided an incredible first impression of the HDR10+ format. Beyond the sharp clarity and crisp fine textures of the 4K stream, contrast was rather striking, resulting in rich blacks and clean, sparkling whites while maintaining detail in shadows and specular highlights. A sequence where Rodrigo conducts an orchestra outdoors in episode 7 of the fourth season was particularly impressive, creating a pleasingly deep and glossy image. 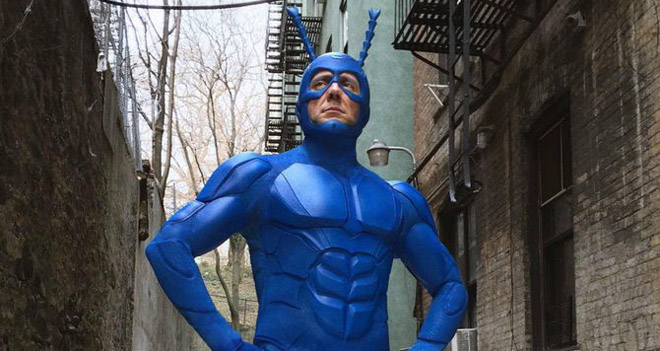 The Tick was also a great showcase for the tech, with vivid primaries and a wide range of hues visible in colors. The title character's blue suit was especially vibrant, and peak highlights got so bright they occasionally made me squint. The windows in Arthur's apartment brought intense sunlight to the screen while still offering a less overexposed look than the SDR stream. Various colorful lights on Dangerboat's control terminals glowed with precision while Ms. Lint's electric sparks radiated from the screen without blowing out. The Terror's chainmail costume also appeared to benefit nicely from the process, resulting in a realistic metallic sheen while maintaining visibility of each and every intricate link in the armor.

Episodes of Electric Dreams were similarly impressive, with vibrant colors that never bled, inky blacks, and lots of pleasing pop throughout the show's sci-fi settings. In fact, the series' main titles sequence, with its bright neon lights and hues, actually serves as a great HDR10+ showcase all on its own. 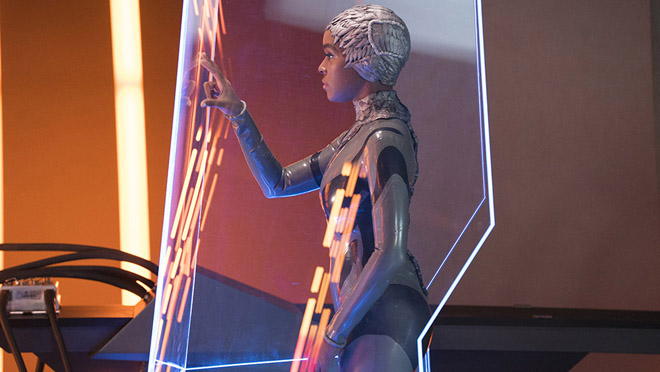 And though not quite as flashy, The Grand Tour looked simply beautiful as well, with lush primaries and nicely balanced contrast throughout the season's exotic locales. The shade of red on one of the supercars was especially bold, making the SDR stream look pale and washed out in comparison.

Meanwhile, Prime movies also seemed to benefit nicely from the format, with Manchester by the Sea employing HDR to bring out a more realistic glow in street lamps and Christmas lights. One shot of a cityscape at night in Last Flag Flying was also particularly impressive, using HDR to heighten the contrast between shadows and lights in buildings. 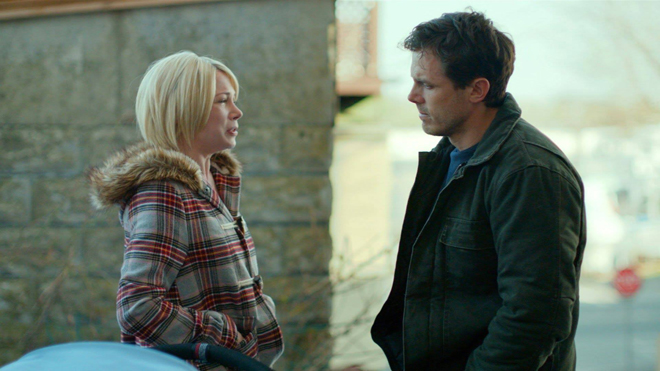 With all that said, though generally great, the HDR10+ content I watched was still not free from a few sporadic flaws and quirks. Most of these issues were likely just a result of the compressed nature of streaming, but some were more in line with common drawbacks usually associated with standard HDR10 playback.

Bright gradations in skintone highlights occasionally lacked smoothness on faces, giving them a slightly posterized appearance. This was also true on some Netflix HDR10 streaming shows, but was never an issue with 4K Ultra HD Blu-rays, leading me to believe that it's probably just a result of compression.

With that said, faces also had a slightly washed out or blown out quality in a few shots, including a scene where Steve Carell's character sits by a window on a moving train in Last Flag Flying. For what it's worth, this was not the case on an older 2016 entry-level Samsung 4K HDR TV that I own when playing the HDR10 stream. It should be noted, however, that the difference in color performance and nit output between that budget model and the Q9 don't exactly allow for an even comparison.

Meanwhile, contrast levels were oddly inconsistent in episode 8 of the fourth season of Mozart in the Jungle, giving some shots an unnaturally flat quality and others a more balanced look within the same sequence, particularly during the scene when Rodrigo and Hailey have tea prepared for them.

An odd anomaly also cropped up during the season two premiere of The Grand Tour at around the 14:05 mark involving a strange neon glow on some trees or bushes outside a car window. This fleeting shot also looked a bit odd in the SDR presentation but it's exasperated in HDR. 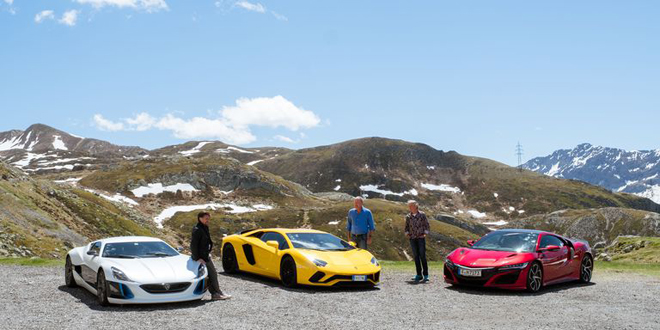 Finally, perhaps most puzzling was an overall dimness to dark scenes in Manchester by the Sea. An early sequence set in a bar and a later scene set in Casey Affleck's bedroom were especially dark, much more so than the SDR stream. And though I think the extended black levels did lend both locations a more realistic atmosphere, background details were definitely crushed in the process, making it hard to see the characters' clothes and the rest of the room behind them. Likewise, pumping up the display's brightness in these scenes introduced compression artifacts and a weird flickering effect in shadows.

For very rough comparisons sake, the HDR10 stream on my older Samsung was not as dim and instead offered more visible background detail -- which is odd, because dynamic metadata formats like HDR10+ are actually supposed to help alleviate crushed scenes like this. Similarly, Last Flag Flying also looked a bit dim in darker shots as well, but not as distractingly so. It should be noted, however, that none of the HDR10+ Prime Original shows I watched had any notable issues with dark scenes or crushing.

Again, without more content and better direct comparisons to other HDR formats, it's hard to really pinpoint if any of these minor issues are symptomatic of the HDR10+ platform itself or just the limitations of streaming or a particular title's grading. Likewise, the Q9 is known to be fairly aggressive with its tone-mapping, so it's possible that some of the occasionally blown out highlights I noticed were just a side-effect of that.

Based on what I've seen so far, HDR10+ is capable of some very impressive imagery but it doesn't seem to be completely immune to flaws associated with standard HDR10. Dynamic metadata or not, just as with any other high dynamic range format, certain shows and movies are going to look better and utilize the tech better than others.

For now, Amazon's lineup demonstrates a lot of potential for the format and offers 2017 and 2018 Samsung HDR TV owners some great demo material. Still, we'll really need to wait until additional content is available on other services and 4K Ultra HD Blu-ray to get a more complete picture of the platform's benefits in action.