And when it comes to recent high dynamic range display and content advancements, few are as buzzworthy as HDR10+.

But just what exactly is HDR10+ and how does it work? And how does it compare to other competing HDR formats? Fret not! If you don't know the difference between static metadata and dynamic metadata, this guide is here to breakdown the ins and outs of HDR10+. So, without further ado, let's dive right into...

HDR10+ is an open, royalty-free dynamic metadata platform for use with High Dynamic Range content and displays. The format builds upon the base HDR10 format and has been developed in partnership with Samsung, Panasonic, and 20th Century Fox. Like other HDR standards, the process uses expanded brightness to improve contrast between dark and light aspects of an image, bringing out deeper black levels and more realistic details in specular highlights -- like the sun reflecting off of an ocean -- in specially graded HDR10+ material.

In addition to enhanced contrast, HDR10+ is often also bundled with support for a Wide Color Gamut (WCG) and a bit depth capability of 10-bits, offering a greater range of colors than those found in traditional HD sources and TVs using the previous Rec. 709 standard and 8-bit technology. This means that WCG content and displays can now produce more realistic colors, providing a more true-to-life representation of an image. Though current Ultra HD and HDR specs provide support for the Rec. 2020 wide color gamut, WCG content available now is typically produced in the DCI-P3 color space (aka the color space where commercial cinemas operate).

As you can see, the Rec. 709 gamut is missing out on many of the colors covered by the larger DCI-P3 and Rec. 2020 color spaces, allowing the wider gamuts to produce hues that don't even exist in the previous standard.

When content is graded in HDR10+ with WCG, the video is encoded with metadata. This metadata is then interpreted by an HDR10+ display during playback, telling the TV what colors to render and how bright or dark the HDR highlights should appear. Unlike the base HDR10 format which uses static metadata, HDR10+ uses dynamic metadata for its workflow.

Static metadata does not change during playback, offering one fixed HDR picture enhancement across an entire piece of content. In practice, this can lead to inconsistent HDR quality in certain scenes, especially if a movie has an overall bright color palette mixed in with a few dimly lit sequences. HDR10+ dynamic metadata, on the other hand, can adjust brightness levels, color saturation, and contrast on a scene-by-scene or even frame-by-frame basis, producing images that are closer to the director's intent.

In order to watch HDR10+ content, users will need an HDR10+ capable display with internal support for HDR10+ streaming apps and/or an external HDR10+ capable Ultra HD Blu-ray player or set-top box. Though HDR10+ dynamic metadata should only technically be possible over the new HDMI 2.1 spec, HDR10+ is expected to be able to work over the current HDMI 2.0 spec thanks to a process called "Infoframe," allowing for the addition of 24KB of metadata. Samsung already has the process working, but the method is still being finalized and is pending approval from the company's partners. On that note, it remains unclear if current HDMI 2.0 AV Receivers will need a specific HDR10+ firmware update to be able to pass-through the format.

HDR10+ is now supported on all 2017 and 2018 4K HDR TVs from Samsung. In addition, Panasonic's FZ950 and FZ800 Series 4K OLED TVs also support the format, but these models are not currently available in the US.

In addition to HDR10+, the competing Dolby Vision format also offers very similar HDR dynamic metadata capabilities -- but there are a few differences between the two, particularly when it comes to how future-proof each platform is.

While both formats allow for mastering with dynamic metadata and support for WCG (up to Rec. 2020), Dolby Vision offers support for a higher bit depth of 12-bits versus the 10-bits used for HDR10+ content. In essence, this means that titles graded with Dolby Vision have the potential to offer a much larger range of colors. With that said, no 12-bit TV panels are currently available, so this distinction is a moot point for now.

Meanwhile, when it comes to target brightness, HDR10+ content is typically mastered for a peak of 1,000 nits and is able to support mastering for up to 4,000 nits. In contrast, Dolby Vision content is graded for a target peak of 4,000 nits and the format can support up to 10,000 nits. As was the case with bit-depth, however, consumer TVs can't take full advantage of Dolby Vision's higher nit grading just yet, as current flagship displays max out at about 2,500 nits.

Finally, HDR10+ is an open, royalty free high dynamic range platform with only a nominal administrative fee required for use. In contrast, companies have to pay a royalty for implementing Dolby Vision tech into their products.

Currently, the only source for HDR10+ content is Amazon Prime Video streaming. According to Amazon, the service's entire collection of Prime HDR content is now available in HDR10+ via compatible displays. This includes shows like The Grand Tour, The Tick, Bosch, and The Man in the High Castle, along with around 100 other movies and TV series.

But while Amazon's website states that a specific "HDR10+" label is supposed to appear in the video details for applicable titles, this is not actually the case. After contacting customer service, the company confirmed that it's still just using a universal "HDR" badge for all high dynamic range content regardless of the format. With that said, Amazon assured me that all Prime HDR videos do indeed automatically play in HDR10+ on supported Samsung TV models.

Outside of Amazon, 20th Century Fox and Warner Bros. have also announced their support for HDR10+. No specific titles have been announced yet, but both companies are expected to release Ultra HD Blu-ray discs and digital content with HDR10+ later this year.

While Samsung is currently the only company to offer HDR10+ displays in the US, they have several worthwhile models on the market. Here's a rundown of some recommended HDR10+ gear available now...

Samsung QN65Q9F 65" QLED 4K Ultra HD ($3,498, full review coming soon!) - As Samsung's top-of-line 2018 LCD display, the new Q9 QLED offers some of the industry's leading color volume and HDR brightness specs. And though blacks still aren't quite as impressive as an OLED panel, the company's return to full array local dimming results in fantastic contrast and a huge improvement over the 2017 Q9's edge-lit dimming. Quantum dot technology for wide color gamut coverage is featured as well, along with support for HDR10+, HDR10, and HLG. Smart TV functions with Bixby Voice control and a new Ambient Mode round out the premium package. A 75-inch ($5,998) model is also available. 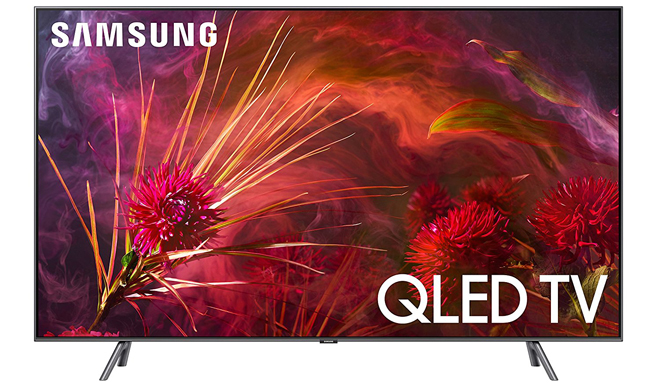 Samsung QN65Q8F 65" QLED 4K Ultra HD ($2,798) - Brightness and contrast are a little less robust compared to the Q9, and some premium design flourishes are missing, but the Q8 offers very similar performance for quite a bit less. Like its step-up sibling, the TV features full array local dimming along with quantum dot technology for wide color gamut capabilities and some of the industry's leading color volume specs. HDR10+, HDR10, and HLG are supported as well. Smart TV functions with Bixby Voice control and a new Ambient Mode round out the premium package. A 55-inch ($1,998) and 75-inch ($3,998) model are also available.

Samsung UBD-M9500 4K Ultra HD Blu-ray Player ($298) - The M9500 features Ultra HD Blu-ray disc playback along with HDR10 support and planned support for HDR10+ via an upcoming firmware update. Likewise, the player includes Bluetooth wireless streaming connectivity and Samsung Smart Remote integration across the UHD ecosystem. In addition, the device can automatically optimize a customer's TV screen and audio levels by analyzing the content source being played -- such as HDR, Atmos or DTS-X -- enabling users to enjoy the content they want without changing their TV or audio settings. A new Private Cinema Mode is offered as well, which allows TV audio to be transferred to personal Bluetooth headphones. Finally, the M9500 also provides expanded mobile integration, letting users stream Blu-ray titles to their mobile devices, along with support for watching 360-degree mobile content through the player on the big screen.

So, there you have it. Those are the basics of HDR10+. If you still have any questions about HDR10+, please let us know in the forums!

-Best TVs to Buy on a Budget in 2018-Best 4K TVs for 2018
-What is Dolby Vision?-What is HDR?-What is Dolby Atmos?-What is DTS:X-What is LCD?-Best Sound Bars-Up-mixed: Dolby Surround vs DTS:Neural:X-Best Dolby Atmos Speakers-Best UHD Streaming Services-HDR Sucks: The Challenges & Frustrations of HDR10-4K Ultraviolet Headaches: How & Where To Redeem Digital Copies in 4K UHD