HDD Deal of the Week: 'The Strain: The Complete First Season (Collector's Edition)' is $29.99 at Amazon

Own the collector's set of FX's hit series' first season for nearly 60 percent off this week at Amazon.

Amazon's deal this week is 'The Strain: The Complete First Season (Collector's Edition)' on Blu-ray for just $29.99 (57% off suggested list price).

Limited Collector's Edition Includes Skin-Crawling Special Features and an Exclusive Master's Bust! Experience the first season of TV's hottest, most blood-curdling sci-fi series from Executive Producers-Writers Guillermo del Toro, Carlton Cuse and Chuck Hogan - along with behind-the-scenes special features that explore the story's journey from best-selling novel to hit show. When a freak virus kills most of the passengers on an airplane, Ephraim Goodweather (Corey Stoll), head of the Center for Disease Control's "Canary Team," is immediately called to the scene. The only way to stop the terrifying disease is to face its source - a sinister supernatural creature whose evil intent seems more powerful than any force on Earth - in this chilling series that also stars Mía Maestro, David Bradley and Sean Astin.

This special offer for 'The Strain: The Complete First Season (Collector's Edition)' is available from now through July 12. 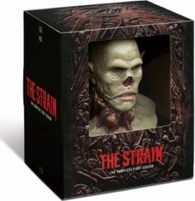