And let's not forget Netflix, Amazon, Hulu, and Vudu.

There remains one caveat that I will come to shortly, but the last year has seen both significant changes to the Xbox One S as well as certain consistencies (gasp!) that lead me to this new, revised opinion of the Xbox One S' media prowess.

To re-test the Xbox One S, I took my own year-old 500GB Storm Grey model and put it against my go-to player, the Samsung UBD-8500. (I used both an LG 65UH7700 and a Samsung QN65Q7F for the display, and a Marantz SR6011 for the AVR.) I tested around twenty discs, mainly 4K Ultra HD Blu-rays with a few normal Blu-rays thrown in. With recent favorites like Guardians of the Galaxy Vol.2, John Wick: Chapter 2, and even the '2017 DTS Demo Disc (Volume 21),' I had plenty of Atmos and DTS:X tracks to test, as well as Dolby TrueHD and DTS-HD Master Audio tracks. (During this test period, Microsoft released their Fall 2017 update for the Xbox One S, which necessitated lots of retesting.) I even included one Dolby Vision Ultra HD Blu-ray, Spider-Man Homecoming. But even with a display that supported both Dolby Vision and HDR10, neither the Xbox One S nor the UBD-8500 support Dolby Vision, and thus, this was strictly an HDR10 run.

The Xbox One S was nearly perfect in so far as each disc played and displayed to the high standard that I have become accustomed to over the past 18 months. I tried to find faults, anything like stuttering or crashing, and the closest I came was when hopping back and forth between a running disc in the Blu-ray app and the Xbox One S Settings menu, which I don't recommend doing. Naturally, I tried to find fault in the color reproduction or unwanted artifacts. Using two copies of The Revenant, I stepped through various scenes of sunlit cold, but couldn't find even a mirage of an issue. (Watching The Revenant on Ultra HD Blu-ray on something like the QN65Q7F is an indulgent use of a home theater, and it's easy to get sucked in even during a demonstration.) 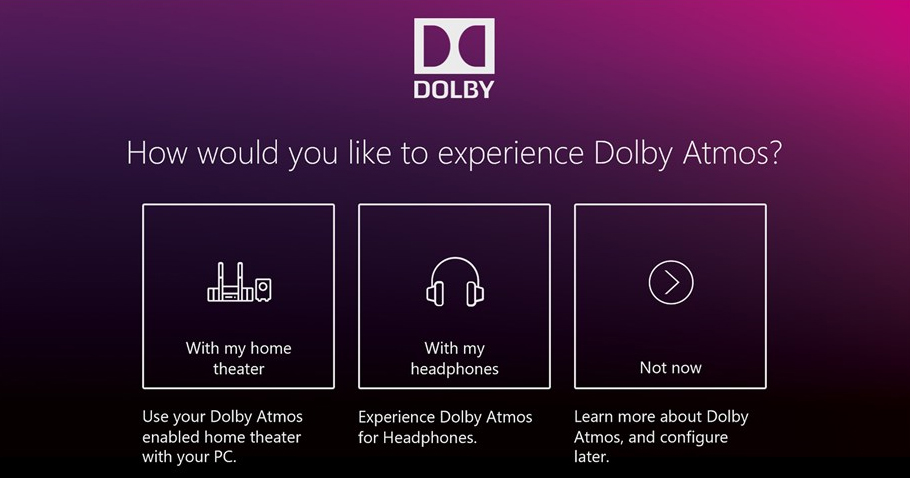 The Xbox One S (and the original Xbox One) now, after years of doing without, support direct bitstreaming to an AVR, which is necessary for both Dolby Atmos and DTS:X. In fact, the Xbox One S (and the original Xbox One) support Atmos at a system level. By downloading the free Dolby Access app, Atmos capable AVRs can playback Atmos content from around the Xbox One ecosystem. This includes some Netflix content (like the Deathnote movie) and Vudu (Dolby Digital Plus Atmos tracks, of which there are many). The Dolby Access app even has several of Dolby's Atmos demo pieces. (Though the video quality on these demos is world's better off a disc.) The Xbox One S even supports Atmos for gaming, but we are still waiting on content. (Gears of War 4 has been promised as having Atmos support via patch.) I found the system-wide Atmos a little buggy, to be honest, especially as it routinely turns itself off (reverting to the PCM 7.1 setting) and as using Atmos disables the system's optical audio port, which I use for a set Elite 800X headphones (post Fall update the system will even make me disconnect the headphones' transmitter base USB connection in order to engage system-wide Atmos). 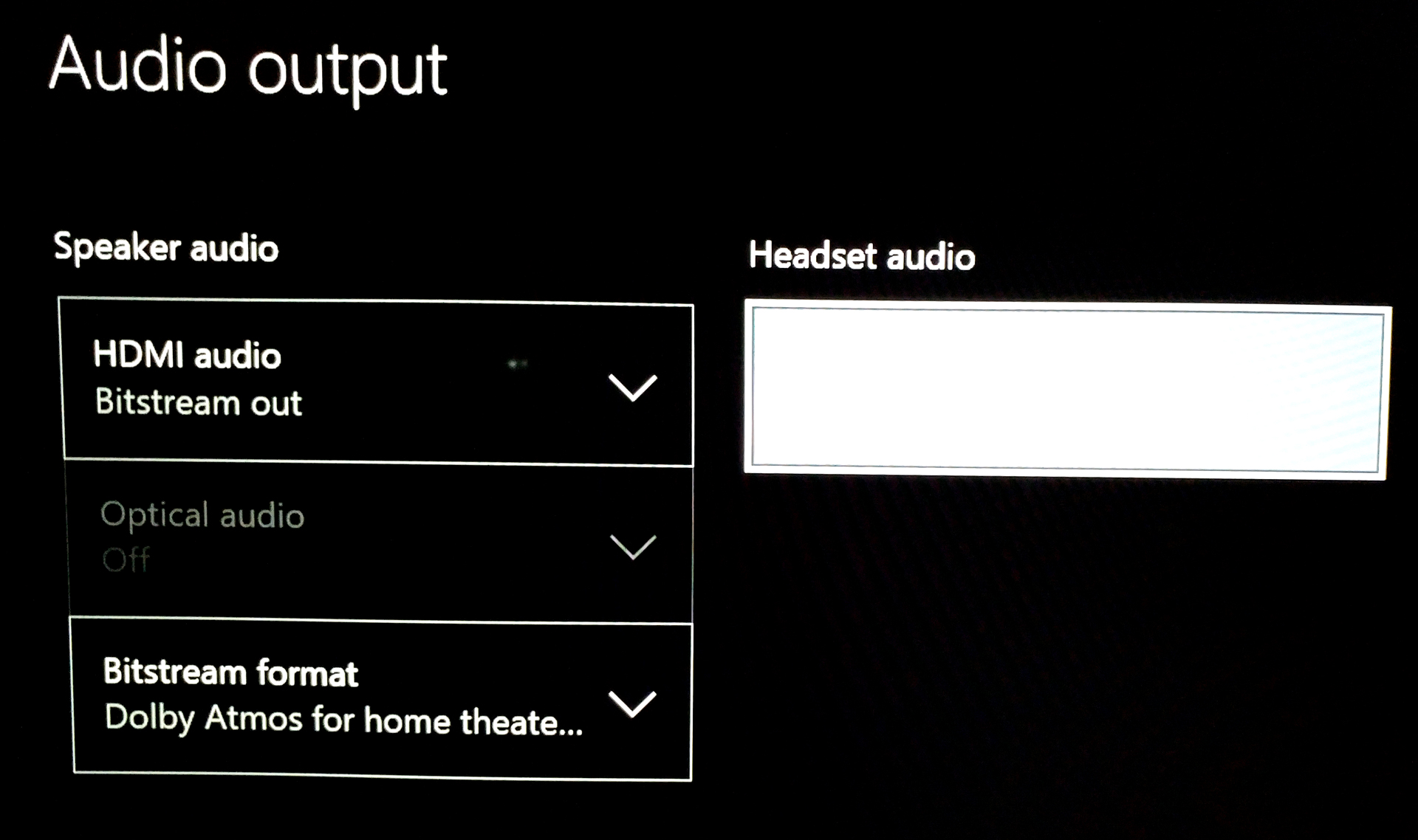 Fortunately, the system-wide Atmos doesn't really matter for Ultra HD Blu-ray and regular Blu-ray playback as the system has a separate setting in the Disc & Blu-ray section. It's a simple checkbox, "Let my receiver decode audio." This setting let me playback both Atmos and DTS:X disc tracks without issue, and in effect, corrected one of the Xbox One S Blu-ray/Ultra HD Blu-ray player's major weaknesses. As a reminder, when this is engaged and a disc is playing, the Xbox One S is unable to layer in its normal UI sounds. That means, when watching a disc, and say getting a message or notification from Xbox Live, there is no "boop-boop." MS may see this as a drawback, but I completely consider this a desirable outcome. 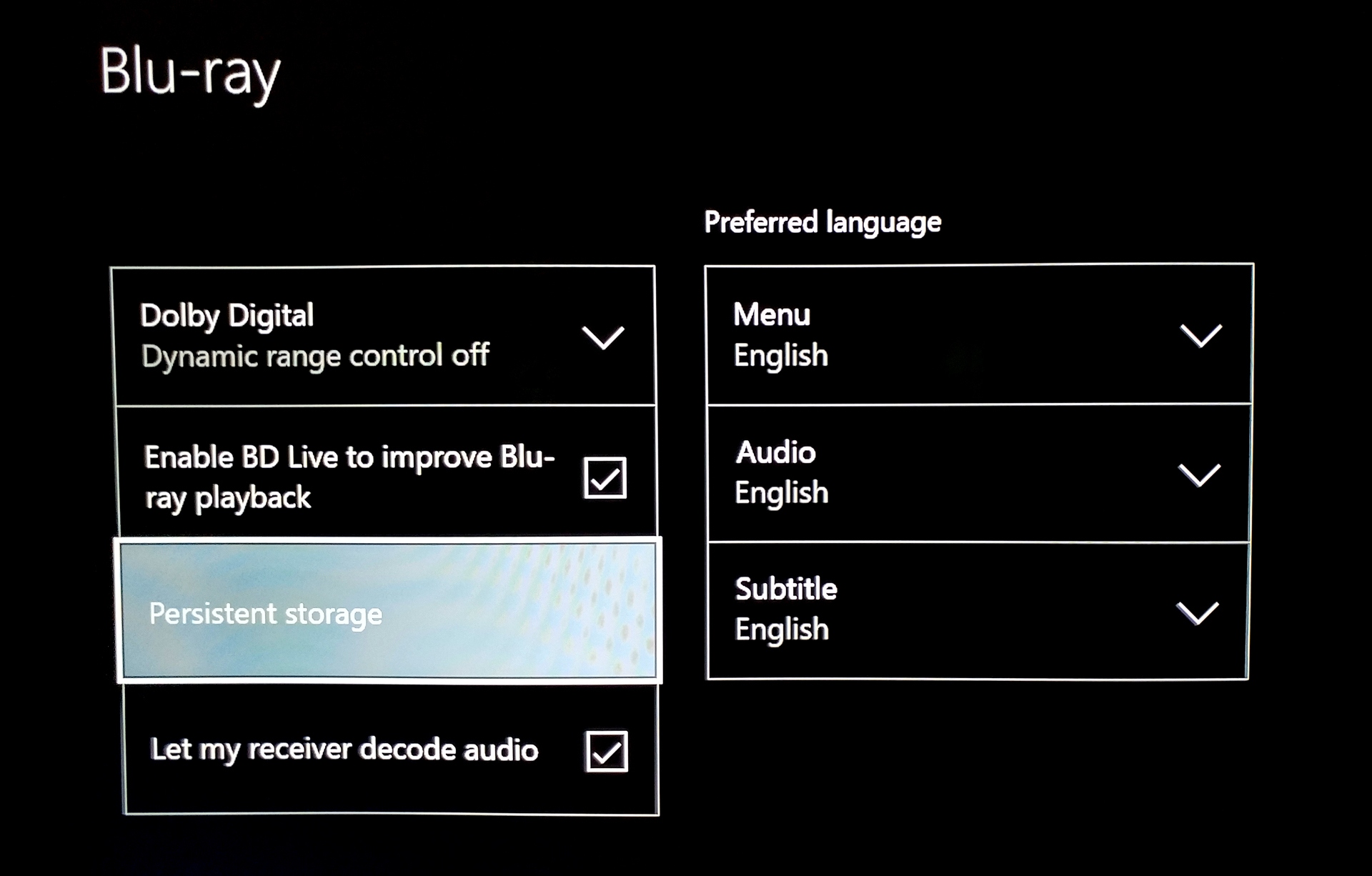 The Xbox One S has its quirks for sure. In both the Energy-Saving and Instant On modes, the system can take a little bit of time (10-30 seconds) to boot up. Like the 360 before it, the Xbox One S will only really boot up with an active HDMI connection, which means turning it on and hoping it boots while watching a different HDMI source to save that boot-up time isn't possible. The system has a vacuum disc drive (no tray) which can only be ejected using the button on the front of the console. In terms of system updates, the Xbox One S gets them regularly even without opting in for Preview updates. The most recent one, the Fall update, greatly improved the system's UI speed, but it also reshuffled the Dashboard, and necessitated a trip to the Video settings.

In addition to system updates, the Blu-ray player app has its own updates. Ditto other video apps. On the positive side, compatibility with discs hasn't been an issue for me at all (and that includes some burned demo Blu-rays). The Blu-ray app launches quickly and launches discs with impressive speed. The disc UI and controls remain superior in most respects to the UBD-8500.

I now use a PDP Talon Media Remote when watching media on the Xbox One S. It's IR-based and unlike the UBD-8500's remote, the Talon Media Remote has all the controls I need, a backlight a runs on AAAs and not an annoying coin cell battery.

It's worth noting that in addition to supporting wireless headsets via USB, the included controller has a standard 3.5mm headphone jack. Thus, it's possible with a regular pair of headphones to watch movies without disturbing the rest of the household. (This is a must for a growing family.) Faux surround can be enabled with the Windows Sonic setting or the Dolby Atmos for Headphones setting, the later of which costs a one-time $15 fee that covers use on the Xbox One and Windows 10 platforms.

As game consoles go, the Xbox One S is reasonably quiet, but it's not as quiet as the UBD-8500. I don't consider this an issue in a home theater setting, but it's a potential issue for some users.

Because the Xbox One S only has one HDMI out, it's not possible to hook it up to a HDMI 2.0 HDCP 2.2 display (as has been the standard for around two years) while also connecting another HDMI cable to an older HDMI 1.4 AVR (or even the rare HDMI 2.0 non-HDCP 2.2) and still get proper Ultra HD Blu-ray playback. The Xbox One S has no analog connections at all, but there is still an optical audio port. For anyone who just bought a new display and new AVR, the sole HDMI out of the Xbox One S is great, but if either of those pieces is more than year or two old, there is likely to be some important issues. 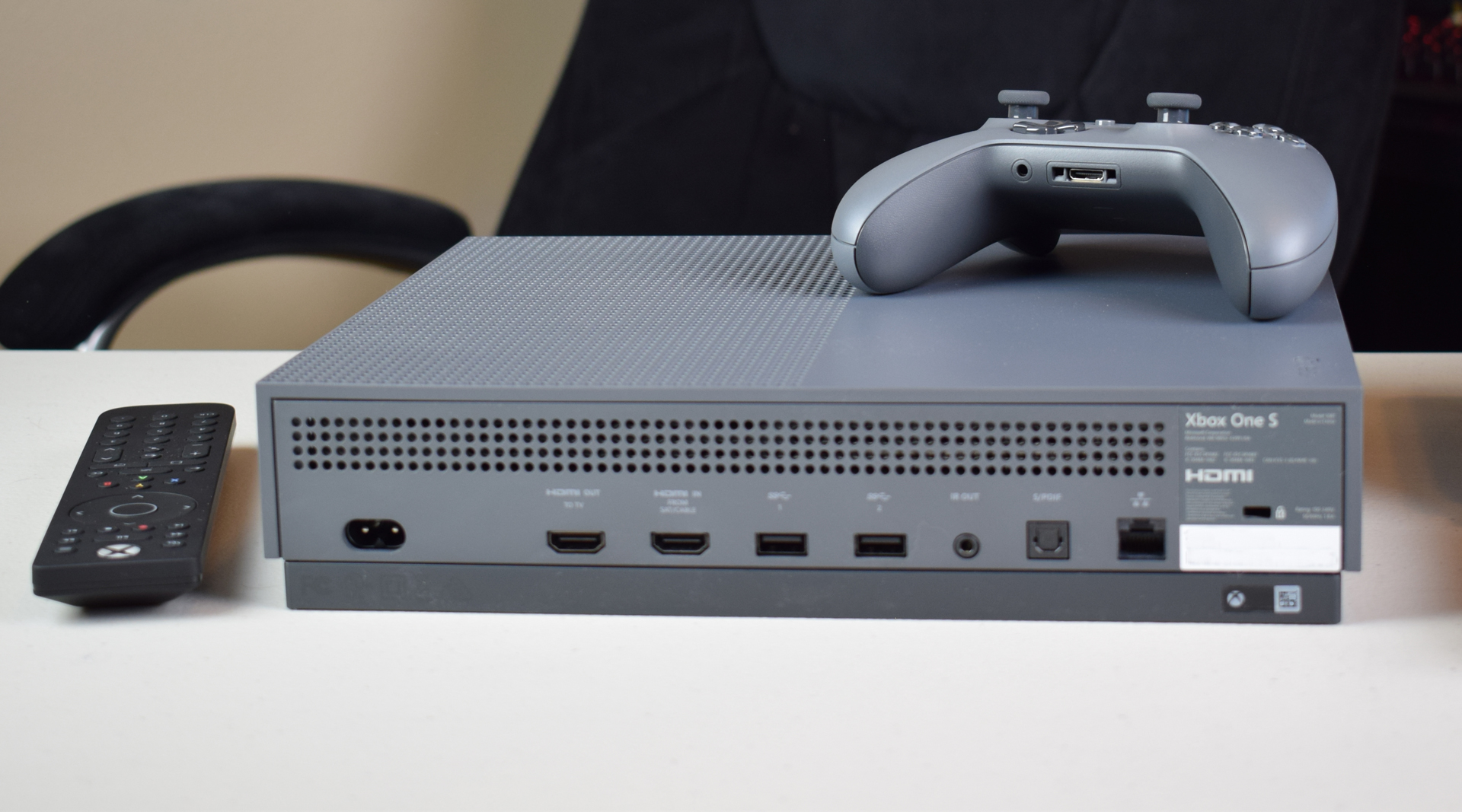 In addition to Ultra HD Blu-rays, the Xbox One S supports 4K HDR playback from Netflix, Amazon, and Vudu. (Hulu supposedly has 4K content, but I was not able to access it.) This is for sure a step up from the system's debut, but the Netflix app is still an HDR mess. (HDR is forced on for all content, leaving all non-HDR content and even app navigation as unsightly.)