The supplemental materials for the mutant-filled double dip available on Blu-ray in July have been detailed.

As previously reported, 'X-Men: Days of Future Past - The Rogue Cut' will arrive on Blu-ray on July 14.

With a never-before-seen, alternate cut of the film—plus 90 minutes of all-new, immersive special features—the X-Men: Days of Future Past Rogue Cut takes you deeper into the X-Men universe than ever before. Rogue makes her return as the all-star characters from the original X-Men film trilogy join forces with their younger selves and unite to battle armies of murderous Sentinel robots who are hunting down mutants and humans alike!

You can find the latest specs for 'X-Men: Days of Future Past - The Rogue Cut' linked from our Blu-ray Release Schedule, where it's indexed under July 14. 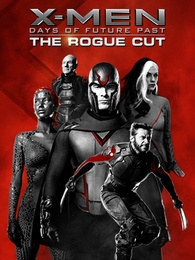