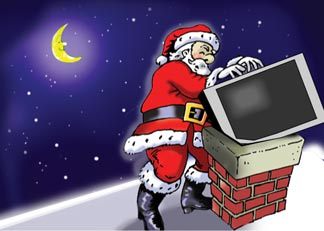 Ho ho ho! It's that time of year, kiddies! Santa's little helper elves here at High-Def Digest have been keeping track of who's been naughty and who's been nice in the next-gen format war, and now it's time to honor the big winners (and losers) of 2006. Who's going to get the best present under the holiday tree, and who's going to get nothing but a big lump of coal? Read on...

Less than a year into the launch of Blu-ray and HD DVD, both formats have already amassed a relatively impressive body of titles. Spanning multiple genres and offering a little something for everyone, we've seen a mix of both new and catalog releases make their high-def debuts. Sure, there were those pesky hardware glitches, and some very bad eggs among the initial releases on both formats, but compare where high-def is six months after launch versus standard DVD in the same time frame, and there is no question we're much farther along. All of the major studios are supporting one or both of the next-gen formats, and with every major consumer electronics manufacturer planning to introduce a Blu-ray or HD DVD player over the next year, things are rosy indeed for high-def.

So now it's time for our picks of what was hot and what was not in high-def software this year. Both the winners and losers were chosen for their all-around value for money -- video/audio quality, breadth of supplemental content, cutting-edge HD features and replay-ability of the main feature. Yes, such lists are always a subjective thing, but then no one ever said playing Santa was easy. So without further ado, here are High-Def Digest's picks for the Best Overall, the Worst Overall, and our Individual Category Winners of 2006...

[Discuss this story in our new forums area]

Well, there you have it. Our best (and worst) in high-def for 2006. Until next time, here's to non-stop holiday viewing, an even Happier New Year, and seeing you all right back here in 2007!

[Discuss this story in our new forums area]