What is NVIDIA G-SYNC?

And now with the arrival of HDMI 2.1 and Variable Refresh Rate capabilities, TVs are turning another corner when it comes to gaming performance, enabling compatibility with NVIDIA G-SYNC on select models.

But just what is G-SYNC and how does it improve gaming? And what gear currently supports the feature?

With those questions in mind, we've put together a breakdown of all the basics behind G-SYNC, covering the tech's benefits and various requirements, along with impressions of G-SYNC in action on an LG C9 OLED TV.

Developed by NVIDIA, G-SYNC is a display and graphics technology designed to provide a smoother PC gaming experience by minimizing artifacts like screen tearing and stuttering.

To help combat this, several new displays now support a function known as Variable Refresh Rate, enabling the screen to alter its refresh rate on the fly. NVIDIA G-SYNC technology utilizes this capability and NVIDIA's own proprietary processing to synchronize a display's variable refresh rate with a compatible GPU, allowing the screen refresh rate to be adjusted within a certain range to match fluctuations in a game's frame rates.

This synchronization between game frame rate and display refresh rate then results in a much smoother experience free from egregious tearing and stuttering during gameplay.

The G-SYNC Ultimate classification expands beyond variable refresh rate to also include support for HDR gaming with 1000 nits peak brightness, full direct-array backlights, and DCI-P3 color gamut coverage. This process requires a monitor with integrated G-SYNC Ultimate capabilities, a PC with a GeForce GTX 1050 GPU or higher, and a DisplayPort 1.4 connection to pair the two.

Meanwhile, the standard G-SYNC classification covers NVIDIA's proprietary variable refresh rate process without any additional HDR requirements. This tech relies on a monitor with integrated G-SYNC support, a PC with a GeForce GTX 650 Ti BOOST GPU or higher, and a DisplayPort 1.2 connection to pair them together. 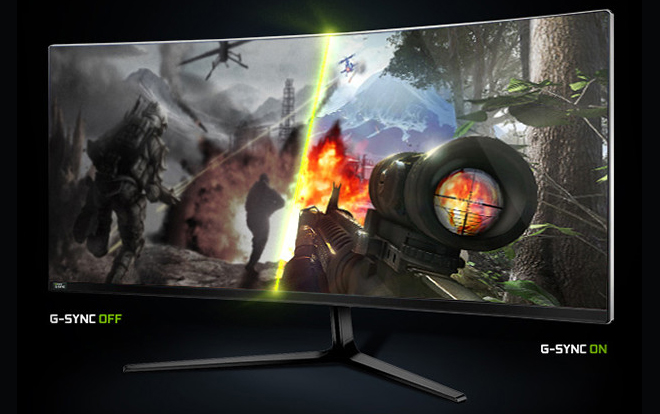 Finally, the new G-SYNC Compatible classification is designed to bring basic G-SYNC support to additional Variable Refresh Rate displays, even if they do not incorporate integrated NVIDIA processing. G-SYNC Compatible displays have been tested to ensure a baseline VRR experience using GeForce GTX 10-Series, GeForce GTX 16-Series, and GeForce RTX 20-Series graphics cards with a VRR range of at least 2.4:1 (such as 60Hz-144Hz).

Likewise, the process can be employed using an HDMI connection with a GeForce RTX or GeForce GTX 16-Series card rather than just a DisplayPort connection, allowing certain TV models to be supported in addition to monitors. 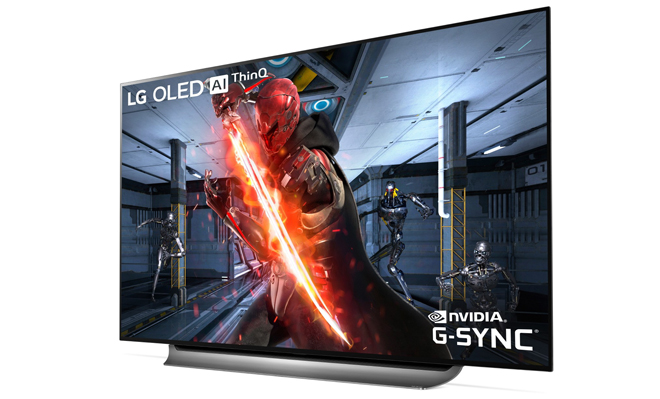 The first TV models set to offer G-SYNC Compatible support via HDMI 2.1 will be the LG C9 and E9 OLED displays. A firmware update will be released for the TVs over the coming weeks, along with a new GeForce Game Ready Driver for GeForce RTX and GeForce GTX 16-Series video cards. And though the LG displays are the only TVs so far to receive official G-SYNC Compatible classification, other TVs with Variable Refresh Rate capabilities (like 2019 Samsung QLEDs) may also be able to offer some degree of G-SYNC support via HDMI once the driver is released.

The demo featured two games: Metro Exodus and Control. Both games were running at a resolution of 2560 x 1440 with a variable refresh rate up to 120Hz. Metro Exodus was also running in HDR, though Control was limited to SDR. And while both games could be configured to run at a higher 3840 x 2160 resolution, that upgrade would have reduced the variable refresh rate range, lessening the feature's benefits.

In general, performance during the demo was silky smooth with G-SYNC activated on both games. While exploring an abandoned and rundown dock area in Metro Exodus, stuttering and tearing were absent, enabling consistent and responsive movement even as I quickly panned and titled the first person POV while running around. Likewise, I was able to pull up a display prompt that actually showed how the TV's refresh rate was shifting in real time as I played through the game. 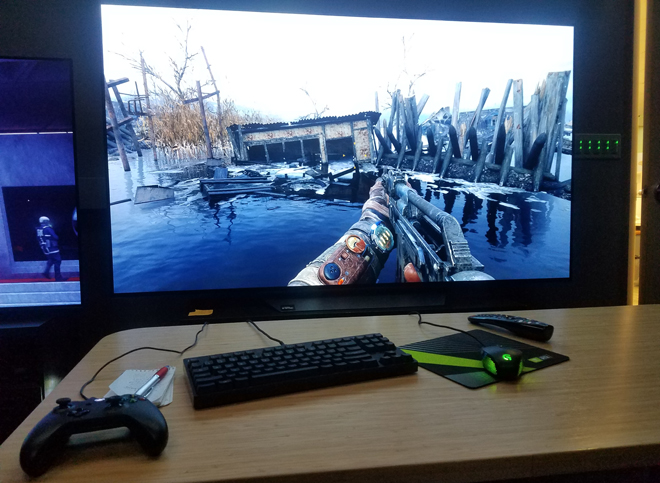 For comparisons sake, I was also able to manually disable G-SYNC in Windows to see if leaving the feature off had any negative affect. Though the shift was subtle, I did encounter some very slight stutter while navigating the same area in Metro Exodus and I noticed some screen tearing when falling underwater and then swimming back up and entering a boat. Repeating this same action with G-SYNC enabled eliminated this instance of tearing.

To be honest, however, the brief portions of Metro Exodus and Control that I sampled with and without G-SYNC activated did not feature many enemies or other factors that would typically cause big frame rate fluctuations. With that in mind, more lively sections and more time with each game would have probably revealed a more dramatic comparison. As it stands, though, G-SYNC and its Variable Refresh Rate appeared to operate as advertised without any issues. 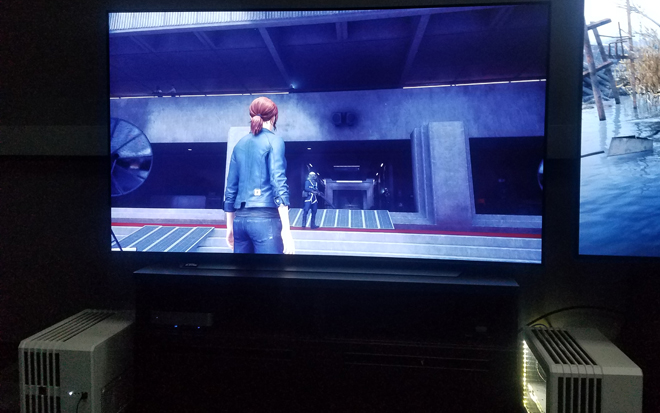 In addition, beyond the specific benefits of G-SYNC itself, HDR performance with Metro Exodus was also quite impressive through the C9, creating a greater range of contrast between light and dark portions of the environment with intense highlights. This was especially evident when standing near windows in a dim building or transitioning from indoors to outside.

And despite playing at 1440p rather than native 2160p, both game's featured rather stunning detail and excellent clarity. Likewise, the display's 6ms response time prevented any noticeable lag and the sheer size and overall picture quality of the 77-inch OLED panel used for the demo created an absolutely immersive experience, offering a rather convincing showcase for OLED gaming performance.