The 1993 crime drama series is headed for high-definition in March.

In an early announcement to retailers, Visual Entertainment Group is working on 'The Untouchables: The Complete Collection' for Blu-ray on March 3.

The Untouchables is an American crime drama series that aired for two seasons in syndication, from January 1993 to May 1994. The series portrayed work of the real life Untouchables federal investigative squad in Prohibition-era Chicago and its efforts against Al Capone's attempts to profit from the market in bootleg liquor.

The series features Tom Amandes as Eliot Ness and William Forsythe as Al Capone, and was based on the 1959 series and 1987 film of the same name.

Eliot Ness (Amandes), disgusted with the widespread criminality that Al Capone (Forsythe) has brought to his home town, Chicago, and inspired by the example of his brother-in-law, Alexander Jamie (Patrick Clear), a federal law enforcement officer, becomes a government investigator himself, and puts together a special squad specifically dedicated to putting Capone behind bars.

The Untouchables is based on the 1959 series and 1987 film of the same name. Produced by Paramount Television, The Untouchables debuted in syndication in January 1993. It lasted 42 episodes. Other series regulars were Paul Regina, David James Elliott, John Newton, Valentino Cimo, Nancy Everhart and Michael Horse.

You can find the latest specs for 'The Untouchables: The Complete Collection' linked from our Blu-ray Release Schedule, where it is indexed under March 3. 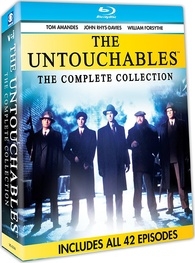