In an early announcement to retailers, Vision Films is preparing 'Check Point' for Blu-ray on March 7.

A 'sleeper cell' Terrorist plot is discovered in a small town where every one knows one another, or so they thought they did. As justice seems lost when an insurgent attack threatens to escalate into a full-blown invasion of the US, a team of unlikely heroes must rise up to fight the enemy and protect their country.

Specs have yet to be revealed, but supplements include Cast Interviews and the Original Theatrical Trailer.

You can find the latest specs for 'Check Point' linked from our Blu-ray Release Schedule, where it is indexed under March 7. 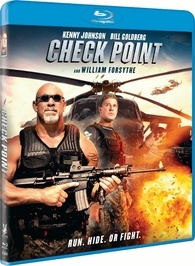