The documentary flick is speeding up to 88 mph on Blu-ray in July.

In an early announcement to retailers, Virgil Films & Entertainment is preparing 'Outatime: Saving the Delorean Time Machine' for Blu-ray on July 19.

OUT OF TIME... tells the incredible comeback story of the world's most famous movie car - the DeLorean Time Machine from Back to the Future. Plagued by souvenir hunters, rats, and the elements, this cinematic icon seemed destined for the junkyard. Out of Time... chronicles the efforts of Back to the Future Co-creator / Producer Bob Gale, Universal Studios, and the trilogy's dedicated fan community as they tirelessly work together to bring the Time Machine back to life.

You can find the latest specs for 'Outatime: Saving the Delorean Time Machine' linked from our Blu-ray Release Schedule, where it's indexed under July 19. 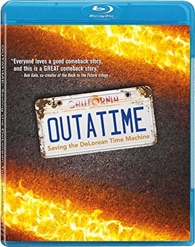