The documentary is set to arrive on home video next month.

In an early announcement to retailers, Virgil Films & Entertainment is working on 'Is Genesis History?' for Blu-ray on April 11.

Is Genesis History? is a comprehensive documentary featuring over a dozen scientists and scholars looking at the world and explaining how it intersects with the history recorded in Genesis. From rock layers to fossils to lions to stars, this fascinating film will challenge and change the way you see the world. Is Genesis History? shines new light on our origins, providing a positive argument for Biblical Creation and the Flood. Dr. Del Tackett, creator of The Truth Project, serves as your guide—hiking through canyons, climbing up mountains, and diving below the sea—in an exploration of two competing views... one compelling truth.

You can find the latest specs for 'Is Genesis History?' linked from our Blu-ray Release Schedule, where it is indexed under April 11. 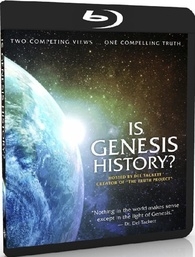