'Jonathan Demme Presents Made in Texas' Now Available on Blu-ray

University of Texas Press has released 'Jonathan Demme Presents Made in Texas' on Blu-ray.

JONATHAN DEMME PRESENTS: MADE IN TEXAS represents a coming together of Austin’s punk/new wave music and avant-garde film community in the late 70s and early 80s. Culminating in a synergetic explosion of music and film, the reverberations are still being felt today. This unique atmosphere cultivated a collective of independent, maverick filmmakers, including Richard Linklater, Robert Rodriguez and a dozen other directors, and later influencing newer talents such as Jay and Mark Duplass, Wes Anderson, and Jeff Nichols.

The MADE IN TEXAS short films evidenced a robust regional independent cinema at a time when that concept was just coming into being. In 1981 while visiting Austin, Jonathan Demme viewed a number of these films. That October, he screened six of them at the Collective for Living Cinema in NYC to great acclaim. A few years later, after seeing SPEED OF LIGHT and INVASION OF THE ALUMINUM PEOPLE, Richard Linklater was inspired to pack up and begin his film career in Austin.

Under the guidance of Louis Black, six films from Austin’s early indie scene are restored and presented together as a package for the first time since Jonathan Demme introduced them at the Collective for Living Cinema in October 1981. Made in Texas will premiere at SXSW Film 2015 and show at festivals across the United States and Canada. This DVD and Blu-ray includes exciting extras, such as photographs from the productions, punk posters from Austin’s thriving music scene, archival paper materials, and much more.

"The really startling thing, though, given the chance to view several top notch Austin-made films in the course of my brief trip there was the exciting discovery of the epic fusion between Austin film and Austin music." -Jonathan Demme.

"David Boone's Invasion of the Aluminum People…[is] a video/film/music/jump cut glaze by this tyro Godard who seems to be sired by Godard out of Don Siegel. Quite impressive (and infinitely slicker) is Brian Hansen's… Speed of Light, a New Wave melodrama that's as good looking as Written on the Wind." -Carrie Rickey, the Village Voice.

You can find the latest specs for 'Jonathan Demme Presents Made in Texas' linked from our Blu-ray Release Schedule, where it is indexed under January 14. 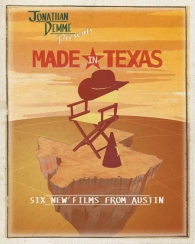