The giallo-style horror film arrives on Blu-ray in September.

In an early announcement to retailers, Unearthed Films says 'Francesca' will hit Blu-ray on September 27.

It's been 15 years since the disappearance of little Francesca, daughter of the renowned poet and playwright, Vittorio Visconti. The community is stalked by a psychopath bent on cleaning the city of "impure and damned souls". Moretti and Succo are the detectives in charge of finding the killer of these "Dantesque" crimes. Francesca has returned, but she is not be the same girl they once knew.

Specs and supplements have yet to be revealed, but the Blu-ray combo pack will include the CD soundtrack and has a suggested list price of $39.95.

You can find the latest specs for 'Francesca' linked from our Blu-ray Release Schedule, where it is indexed under September 27. 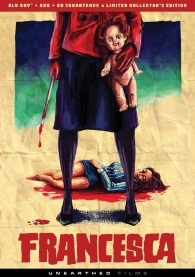