As Dolby Atmos achieves greater saturation in cinemas and homes, it's been fascinating to see how filmmakers choose to evolve their sound mixes for specific productions. Some sound designers elect to vault the entire soundstage skyward, placing music and sound effects objects above the listener for a sense of hemispherical immersion, while others embrace the format's ability to have an ultra-wide front soundstage. In cinemas, this is wider effect is achieved because Dolby Atmos requires inserting extra, individually-powered speakers in the gap between front channels and side-surround speakers. At home, the best way to recreate these mixes is with a 9.1.2 or 9.1.4 Dolby Atmos configuration; i.e., by adding a second pair of ear-level speakers out wide and in front of the main listening position.

'Minions' (also available in 3D) boasts such a mix. While height objects are generally reserved for a few key sequences, this Dolby Atmos mix takes special care in panning all the Minion character voices -- particularly Kevin, Stuart, and Bob -- as they run on and off screen, from right to left or left to right. Outside of 2.0 stereo mixes, I don't think we've ever heard a sound design that so heavily relied on front L and front R placement, which expands even further with the addition of front wide speakers.

If you recently purchased (or plan to purchase), 'Minions' on Blu-ray, here's a go-list of the Blu-ray's top five demonstration-worthy moments. Warning: some SPOILERS ahead. 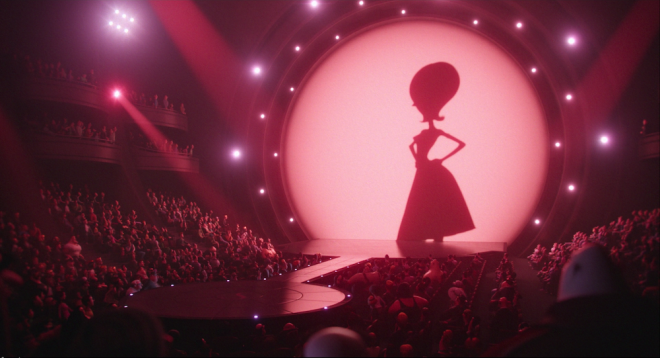 The first immersive demo on the disc. The Minions travel to Villain Con hoping to find a new Boss. There, the first female super villain, Scarlet Overkill, gives the keynote speech where she challenges all of the attending villains to steal a stone to earn a chance to be her henchmen. Audio geeks will perk up at this sequence thanks to its sense of place and location. After flying in on a jet-powered dress, Scarlet's voice echoes off a vast auditorium, making the audience feel as though we too are at Villain Con. A complex multi-character fight sequence follows, offering up numerous pans as characters come in and out of frame. 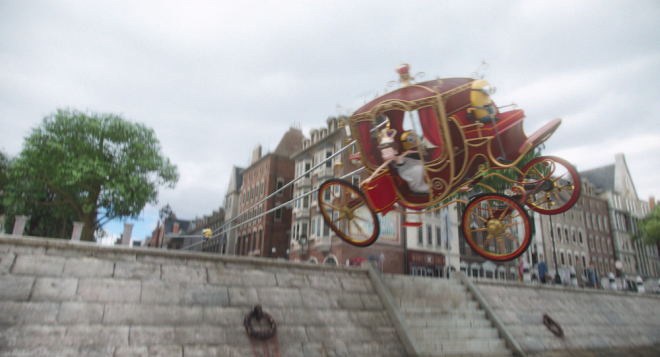 After being thwarted in the Tower of London, Kevin, Bob, and Stuart set off in mad dash to capture to capture the crown from the Queen of England herself. Chase sequences are usually a lot of fun for surround sound enthusiasts. What makes this track a Dolby Atmos demo is the Slinky-eqsque sound tone of Bob's robotic arms and legs (courtesy of the Overkill weapons lab). They whoosh and clink around the audience and above. Police sirens, horse carriage noises, and Minion voices provide a lot of ear-level activity too, while a passing train roars overhead. The whole complex sequence builds into a fury that releases with a Sword in the Stone gag that involves choral music and a flew flapping bird wings. 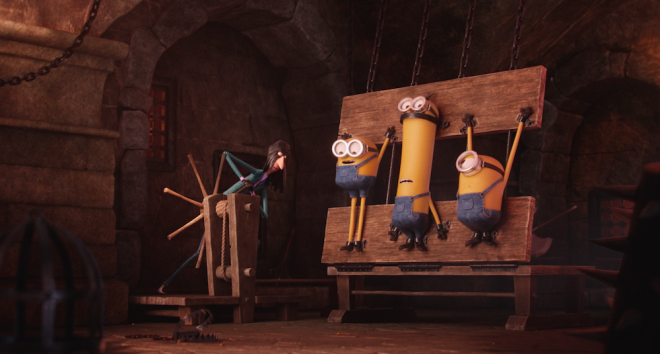 Unable to trust the Minions, Scarlet Overkill sentences Kevin, Bob, and Stuart to death in a medieval torture chamber. But Dungeon Master "Definitely Not Herb Overkill" is unable to off the talking bananas, so the wholly thing devolves into a photoshoot. This is a fun Dolby Atmos demo thanks to excellent Minion voice placement, subtle surround panning, and one excellent effect where Scarlet uses an older metallic speaker system to summon Herb, which comes from the top left. Very lifelike (you know, for an animated movie). 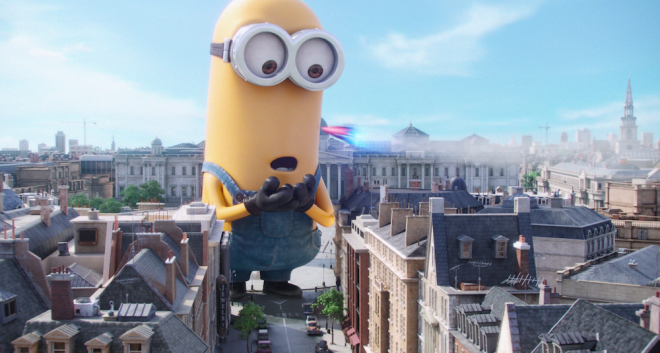 Seven minutes is a crazy-long demo, I know, but this entire sequence is not only pretty spectacular in term of dynamic range, LFE performance, and surround sound panning, but also offers the most active engagement of height speakers in the entire movie. After Kevin steps into an experimental weapon, which turns him into Monster Kevin, a mighty yellow beast that towers over London buildings who wants to save his friends. As Kevin stomps through the city and battles Scarlet Overkill, your subwoofers will flex their bassy might. Score elements and echoing voices fill the sound stage. Explosions roar with a hefty punch. Sound effects like sirens and horns are perfectly placed, while Scarlet's flight movements track wonderfully overhead. I'm sure there are a few mini-demos within this section, but Dolby Atmos fans are going to love this entire sequence. 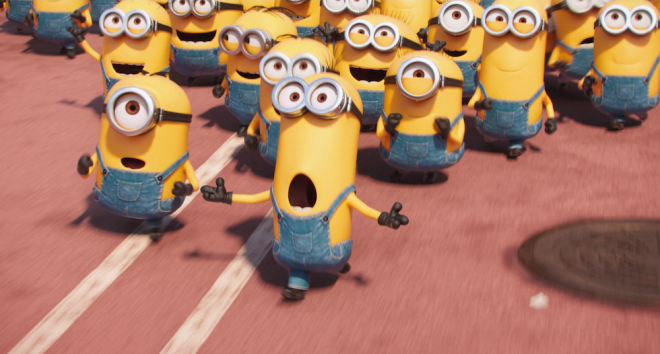 This final gag -- for movie and sound mix alike -- involves the Minions chasing after the next potential villain Boss. It begins with the Minions running, their voices again babbling around the front sound stage. There's warm-toned voice over. And the aural highlight involves a craft transforming and taking off overhead as the credits roll. This demo highlights an entire range of Dolby Atmos' spacial capabilities in a shorter run time than some of our other demos.