The Troma horror flick is coming to Blu-ray in December.

In an early announcement to retailers, Troma is preparing 'The Last Horror Film' for Blu-ray on December 15.

Joe Spinnell (THE GODFATHER, MANIAC) plays Vinny, a cabbie with Hollywood aspirations. Determined to have Jenna Bates (Bond-girl Caroline Munro) star in his first film, Vinny follows Jenna to the Cannes Film Festival, where her entourage slowly and mysteriously begins to disappear. It's time for this Hollywood scream queen to learn what true fear and paranoia feels like. Newly restored and featuring the music of Depeche Mode, The Last Horror Film pushes the boundaries of violence, suspense, and eroticism to new extremes. Who else will stand between Vinny and his star?

The Blu-ray will feature 1080p video, a Dolby Digital stereo soundtrack, and supplements will include: New intro by Lloyd Kaufman (President of Troma Entertainment and creator of The Toxic Avenger); Audio commentary; Mr. Robbie (A shortfilm by Buddy Giovinazzo ( Combat Shock) starring Joe Spinell); Highlights from the 2015 Tromadance Film Festival; A full episode of Troma's latest web-series Kabukiman's Cocktail Corner starring Paul Booth; The return of one of Troma's most beloved characters, Dolphin-Man; and Trailer.

You can find the latest specs for 'The Last Horror Film' linked from our Blu-ray Release Schedule, where it's indexed under December 15. 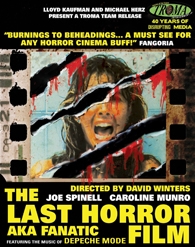 Discs mentioned in this article: (Click for specs and reviews)
The Last Horror Film (Blu-ray)